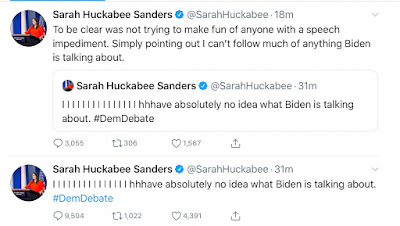 I'm posting a screencap (click to enbiggen) because she's bound to delete it after a long-enough period of roasting, but it really does appear that Sarah Huckabee Sanders tweeted an impression of a stutter during tonight's Democratic debate, and then, instead of apologizing when being called out for it, tried to explain that her critics are the dumb ones for not understanding that what she was saying was, Biden doesn't make himself understood very well.

Because she's a nasty piece of work, of course, which might have been part of her home training. But also because even though she isn't still Trump's press secretary, she still sounds just like him. A hurtful asshole, in other words.

Biden responded without calling her an asshole, which is better than me, I guess.


I’ve worked my whole life to overcome a stutter. And it’s my great honor to mentor kids who have experienced the same. It’s called empathy. Look it up. https://t.co/0kd0UJr9Rs
— Joe Biden (@JoeBiden) December 20, 2019

UPDATE: Huckabee has apologized as one does when literally everyone has basically called one an asshole. But I still feel like it was intentional and she probably had heard this about Biden before. She's not brand-new around here.


I actually didn’t know that about you and that is commendable. I apologize and should have made my point respectfully. https://t.co/fbmVAqDoWI
— Sarah Huckabee Sanders (@SarahHuckabee) December 20, 2019

There is nothing to be said about... ahhh, this creature that doesn't border on misogyny, which is unfortunate as it is the only language we have to describe just such a creature. I too have struggled my entire life with stuttering, and I'm here to tell right now boys and girls that there is nothing more satisfying in this world than punching some bastards' face in for making fun of it. Scum. Just scum. It isn't human. It is less than human.