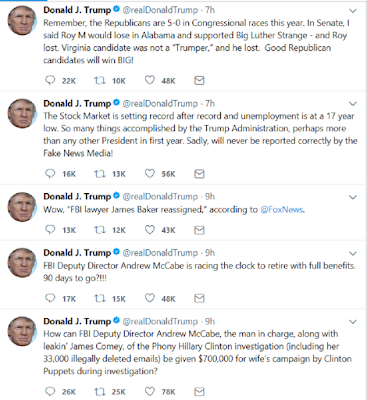 In the vein of Twitter diatribe that I think of as "Trump Going 'Boom!'" the Peerless Feeder had to engage with social media to soak up likes and retweets and outrage and whatnot--again. So, in his recent obsession, the FBI is chockfull of wacky liberals out to get him who for entirely partisan reasons tanked the email investigation against Hillary Clinton and ginned up the Russian hacking investigation that his campaign/administration got swept up in (because of all the Russian contacts people in the Trump orbit actually had and the ridiculous mendacity they chose to use to half-assedly hide it)-which now makes career professionals like FBI Deputy Director Andrew McCabe and FBI Counsel Jim Baker his targets for cranky Twitterage.

It's adorable, really--he once pretended he fired James Comey because he was too hard on Clinton (is she supposed to be the phony--or was the investigation?) and now Trump is pissed that the investigation didn't go far enough? The little joys of an extended interobang ( ?!!!) to imply that FBI Deputy Director McCabe might not outlast the period of time he indicated before he retired (when he would be eligible for pension). Does this sound like Trump is going to fire a man before he is eligible for pension--out of sheer spite? To me, a little!  And Trump also says he is learning that James Baker is being reassigned from Fox News. Because he isn't in the loop on personnel and learns everything he needs to know from "the shows" despite never watching tv?  Ah!

Also, he now thinks official reporting of the unemployment rate is spot on despite calling it fake news during his campaign, and doesn't realize that the news covers the stock market on the daily. And he conveniently forgets the robocall and the rally he himself personally held for Roy Moore, the pedophile, whose name will now be associated with Trump's desperate support because his hand in Congress is weak! "Good Republican candidates will win BIG!" for a value of "Good" that means they win and a value of "BIG" that means he will fake it later.

I don't know why he had to explode on Twitter just now, when we are finally able to say "Merry Christmas" and mention "Jesus Christ" and all that. Maybe he's worried about some spirits regarding former associates, or the past, or maybe his present, or maybe he's thinking about Christmases yet to come.