A Matter Of Perspective 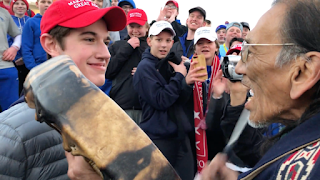 Sometimes, there are stories that you want to sit on as a blogger, even if it seems like the thing to do is "post while the iron is hot". But I didn't have any interest in hurrying where the Covington Catholic kids' videos were concerned because there were multiple sides of the story, and I wasn't counting on anyone necessarily getting the full picture because the story sometimes gets lost in the symbolism. These white kids and their MAGA hats. The elder and his dignified drumming. We can unpack these things slowly if we want to, and do the work of understanding, and watching the many different perspectives, or we can work from our own corners. We can find the version that fits our own perspective, or understand there are different perspectives at work. I still don't like writing about this on the grounds that I don't understand fully except from my own attempt at getting a fuller perspective, but understand how my blogging "muses" set me up--sometimes I have to write about a thing whether I like it or not to have that topic out, and I can't move on until I just get the story out of my system.

The way I see it with the Covington Catholic kids is pretty similar to what Steve M. wrote, although my perspective is from Philadelphia, twenty years later. The thing you learn in a city with diversity or various viewpoints is that not everything is about you, concerns you, or needs you to confront it. You can be called a blue-eyed devil whore, and that's just some shit someone has to say about you because they are working out their demons in public, where about a hundred other people can also see them being ugly, and you not listening. There is no reason to call out or call back. The Covington Catholic kids were confronted by the Black Hebrew Israelites, and had no reference for how to not confront them. They weren't ever told this kind of provocation existed. These kids never took a downtown subway somewhere, I guess. They were going to be unnecessarily confrontational, and it looked like there were no adults who would tell them not to do this.(Not to turn the other cheek? Even if there was a pretty solid Christian basis for not starting shit, the chaperones weren't trying to be about it.) Nathan Phillips thought he was peacefully intervening because from his point of view, these young people needed their attention turned away from the negative energy the BHI were bringing and hoped they would be respectful of his prayerful positive energy.

But they didn't know how to confront that, either. These were, to them, just other people of color acting weird at them, and they could not determine if this was a threat or on their side, and not knowing how to just not react, they behaved with ignorance, because that was what they had.

I'm not going to say they were necessarily behaving hatefully right there, because I don't think they knew how they would be seen. They didn't react as if they would be seen, even though many phone-camera angles captured them. I think they behaved ignorantly, because this is what they had. A lot of crappy white behavior (me just speaking as a white person) probably boils down to ignorance. This is sometimes called "Hanlon's razor": Never ascribe to malice what can be adequately explained by stupidity. Because I work for the government, I have had to make myself very much aware of how this variation on Occam's Razor really works.

But there is ignorant, and there is ignorant. These kids are mostly white (except for the one unfortunate who the BHI called a slur), and so are all of the faculty at their school, from what I understand. They are surrounded by whiteness to the exclusion of knowing how to deal with diversity, and with Catholic teaching such that they were there, all teenage boys, to protest against adult women having options for their own reproductive health. And possibly even being ignorant to passing women because of that idea. And wearing explicitly political gear to demonstrate their unity as if not understanding how Trump paraphernalia is received, not as just a political statement, but a racial and misogynistic statement.

The very nicest thing I can say about these kids is that they were in a situation where they did not know what to do, and did not know how their MAGA hats made them look worse, and that many extremely online people have ascribed to them a maturity and situational awareness about how racist they were being that they did not actually possess. They are kids, and I think they should be aware of more than their background has given them, and should be able to learn and grow from this experience, not be shunned and screwed up and have their learning curve cut off because the people around them have circled the wagons. That seems really dumb, and I want all people to just experience life to the fullest, by being properly prepared to experience diversity and learn how to be respectful when the moment happens. Like these kids didn't learn, but still could.

As an aside, I think all teachers should be schooled in how to work with diversity, and accept the diversity of children you will confront in your own pedagogic careers. For example, Karen Pence is currently a teacher at a school that bans LGBTQ kids and teachers. Her husband is offended because he thinks that people are rejecting this position because we despise Christianity. I am disgusted that he feels the only kind of Christianity is the kind that that rejects gay people, but further, that he thinks that he can politically represent the country--except for LGBTQ people.

That means he can't be my Vice President, because I am who I am. And if Mike Pence is offended by anything more than he is by having Trump as president, he can eat dirt as far as I'm concerned. I don't know what more perspective than the pledge of allegiance he needs. But I am sure he hates gays more than he loves America, and would taunt POC's and reproductive-age women along with the Cov Cath kids all day. And I guess his wife feels the same--gay and trans kids are less American or Christian or children of God or people she needs to give a shit about, let alone teach about colors and beauty and culture and how history intersects with human constructs envisioning different worlds. Many of which were envisioned by gay people who envisioned those worlds because of the world we live in being the kind she and her ilk make.
Posted by Vixen Strangely at 12:33 AM