My Generation Didn't Burn Out, It Just Faded Away 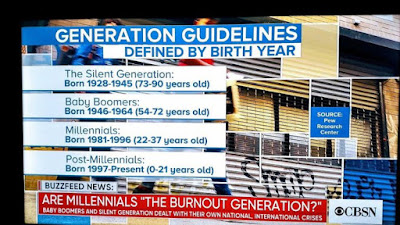 Sure, Boomers "Tuned in, turned on, and dropped out", but apparently, Generation X just zipped past "Abort, retry, ignore, fail?" to "404 Error: Not Found".

This jpeg was bouncing around Twitter and seems to have to do with this Buzzfeed essay about "Millennial burnout". (I haven't come across the CBSN clip it's from). And I'm not going to snark about the idea of "Millennial burnout" at all--my generation was called "slackers" because of our perceived failure to "adult", when a lot of us were pretty self-sufficient but just weren't overtly ambitious because it looked like a scam. (Although, in lieu of getting jobs, a lot of my generation went in for start-ups, so, maybe not so slacky?) Our generation was also smaller than the Baby Boomers and Millennials. We were a little burned out, but made it look like disaffection because really? Who pays attention to us, already?

And if you think about it, we didn't get a cool name like "greatest Generation", "Silent Generation", "Baby Boomers", etc. Just a mathematic variable--solve for "X". The excluded middle generation, if you will.

I just found the graphic sort of dead-on: that's right, we aren't defined by our, like, birth year, anyway.

(Fast edit: I was thinking of Neil Young as quoted by the Kurgan in the first Highlander movie when I wrote the blog title because it included the idea of "burn out" and the erasure of Gen X, which is basically entirely on brand for my thought processes, but then I darkly recalled that this was the tag of Kurt Cobain's suicide note. Which as a reference, is shockingly on brand for my generation.)
Posted by Vixen Strangely at 12:11 AM

Thanks for this. I'm looking at this jpeg and my jaw is still on the floor at the realization that they just simply...skipped over Gen X. Like we didn't fucking matter (pardon my language).

Still, at least Gen X-ers are the parents of post-millenials--who seem to be doing all right. I'm an uncle to a niece born in 1999, and she and her friends make me hopeful for the future. The same can be said for the Parkland teens and other teens who pushed to get the vote out in 2018.

Then again, I am a member of Gen X (mid-40s) who may be drifting into a relationship with a Millenial (mid-30s).

13th Gen: Abort, Retry, Ignore, Fail? is the short version of Strauss and Howe's longer work - Generations. Generations is a book chock full of data that has been cherry picked and massaged to fit into what seems to have been a pre-determined framework.

This whole naming generations thing is stupid and it's just a bogus update of determining peoples' personalities based on their birth date. Pseudoscience from beginning to end.

The only GOOD thing to come of the the Gen 13 book as an album by Canadian prog rockers Saga called Generation 13.

Consider this: my generation dropped the ball. We stopped The War. Our War. Viet Nam. But we didn't stop War. We forced Nixon to accountability. Whoopee! Nixon quit, The War is Over! Let's finish our law degrees, cut our hair, and buy beemers and half-million dollar houses on the High Desert!

We stopped The War. Our War. Viet Nam. But we didn't stop War. We finished our law degrees and bought overpriced McMansions, and left the machinations* in place, notably Bush/Carlyle, Cheney/Haliburton and Rumsfield/etal, that led to the Authoritarian State - Fascist State - we are about to, if not have, become.

We dropped the ball.

Don't be so hard on yourself, we could have changed the world, but we didn't.

Agree totally with Thomas Ten Bears.
When I graduated high school, Vietnam was over, Nixon was out.
Then we elected Jimmy Carter
4 years later, Ronald Reagan was elected (bad), then RE-elected (VERY bad).
And it's been more downhill than uphill since then.