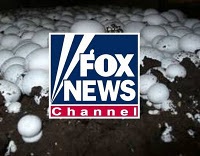 I'm not saying that I would necessarily root for the death of any media outlet in the wake of what happened to Gawker. See, if the point of journalism is, to my mind , in part to "Comfort the afflicted and afflict the comfortable" as the great film Inherit the Wind put it, then no outlet should die out because they afflicted the comfortable. Because that was all they did. Peter "we didn't know but we did" Theil got pissed enough to use Hulk "who cucked Bubba the Love Sponge" Hogan as a unit to fuck Gawker into oblivion. (Way to be a unit, brother!) But if the death of any outlet seemed kind of fit, well, FOX Mushroom Farm would be the one I'd pick for a little Darwination.

This has been my position for a long time. But it is bolstered by the recent lawsuit of former FOX News personality Andrea Tantaros describing the atmosphere of her former workplace as a "sex-fueled, Playboy-mansion-like cult."  This grabbed me, because I described it as being cult-like after the Gretchen Carlson revelations. And not without reason, they were lead by a paranoid who saw trouble in the shadows and viewed political opponents as an enemy.

And yet this asshole made Trump a thing, possibly. Trump should have never been a thing. Roger Ailes has a lot to atone for. I'd settle for him living to see his Faux-News paradigm shatter to never, ever, recover again.
Posted by Vixen Strangely at 12:50 AM

Fox will die when demand for American right-wing agit-prop dies. It's just like drugs, gambling, prostitution, alcohol - demand driven markets. Any time there's a market, a supplier will emerge to fill it. You say that Fox/Ailes made Trump possible, but that's not entirely accurate. The same people who are Fox VIEWERS are Trump voters. These are our fellow American citizens - yours and mine - and they flocked to Trump because none of the other conservatives attempting to supply what they wanted to buy were sufficiently blatantly mean-spirited, hateful and authoritarian.

America's problem as it relates to racial, sectarian and nationalist hatred is fundamentally the south. It's not that it doesn't exist throughout the country, but it's the overwhelming majority in our southern states, providing a natural base for political power. It would ultimately make sense to split the nation into two, allowing them to govern as they choose and freeing us from their political and ideological influence...

Hi Vixen, I've heard people on the right wish that it were possible to have two different countries so liberals could live in one half and conservatives could live in the other. It wouldn't be north & south, however, because the maps demonstrate that conservatives pretty much dominate the middle of the county and liberals dominate on the coasts. For example, Mike Pence is from Indiana, a very conservative state though not in the south.

If one is well-to-do enough, one doesn't have to wait for a separation. Barbra Streisand has announced that she will leave the US if Trump becomes president. A lot of people say this, and a few of them actually do it. In the past everyone wanted to move to Canada. This is not always satisfactory, as Canada has basically the population of California, and about everyone lives a hundred miles from the border. Canada is a sort of bubble economy attached to the US, and therefore gets dragged, willingly or not, into whatever the US is doing. They use the metaphor of the mouse and the elephant.

Eurabia is not as attractive as it once was. The conflict with radical Islam is propelling them into severe safety issues, and many people of France and Germany are screaming for sanity while politicians drag their feet. Still, there are probably places that Barbra could go and be surrounded by her security details.

My biggest objection to Fox, CNN, MSNBC, CBS etc etc is that they don't have news programs anymore. They just want to have on-air squabbles about their ideologies. My view is that mostly they try to develop or amplify conflicts to give all of the non-famous people out there something to fight about. I'll spare you the metaphysical explanation. I just think most of our postmodern public broadcasting exists for upwardly mobile famous people to become wealthy and/or celebrated using the vehicle of politics. Most people today in the public sphere are trying to get something – famous, elected, excited. And the way you do that is by creating drama. If you have drama, you have excitement, and excitement brings sponsors. If you can ratchet it all up, you get raises and more face time.