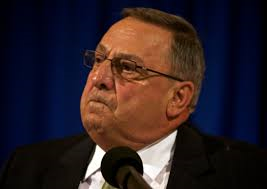 So, just to deviate for a minute from 2016 electoral news, Maine Governor Paul LePage dropped a nasty message on a state congressman's voicemail that has been making the rounds:

“Mr. Gattine, this is Gov. Paul Richard LePage,” the governor’s phone message said. “I would like to talk to you about your comments about my being a racist, you (expletive). I want to talk to you. I want you to prove that I’m a racist. I’ve spent my life helping black people and you little son-of-a-bitch, socialist (expletive). You … I need you to, just friggin. I want you to record this and make it public because I am after you. Thank you.”


The word in the above quote depicted as (expletive) is "cocksucker". As invective goes, that's kind of 50-50. I wouldn't bat an eyelash myself if I was called one--Lenny Bruce had a joke that went something like there's a four-letter word that's a ten letter word, and you wouldn't marry a girl who wasn't one. But it's directed against a gent, so I suppose that could be construed as a little homophobic while we're here.  But saying weird stuff is kind of Paul LePage's MO.  His mouth is unfiltered--you know, like sewerage before it hits the treatment plant.

His reply to being referred to as making racist comments is pretty hot--but it comes with a challenge--"I want you to prove I'm racist." Huh. Well, we can't read minds or see into the mysteries of the human heart, but I would say his comments on drug dealers that impregnate white girls is pretty damn racist. His echoing the support of Donald Trump's refugee ban idea is also in the racist ballpark. "Foreigners are diseased" is some pretty racist bullshit. His willingness to tell the NAACP to kiss his butt and President Obama to go to hell are also all kinds of undiplomatic and concerning.

Now, you can't know what is in someone's heart, but just judging by what comes out of LePage's mouth, he has some pretty defined biases. Which does make one wonder, as Martin Longman does--exactly what use would he be put to in a Trump Administration? (Something to do with Civil Rights in the Justice Department, most likely, and let's snatch up KS AG Kris Kobach for something there, too, I would think.)

Really, I think a duel of the minds might be in order to settle the matter of LePage's honor. But I wonder if LePage might need to seek a second to find a weapon at all. And drink a fifth or more to determine whether any honor was harmed in the making of such comments at all.
Posted by Vixen Strangely at 12:04 AM