Fox Mushroom Farm Looks Like a Cult, Doesn't It? 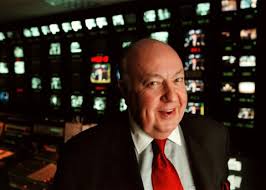 I sometimes cynically joke about the cable news Goliath I have referred to as "Fox Mushroom Farm" because the worldview they peddle is distinctively bent. They will drop obviously untrue spin into discussion of a topic, like claiming that somehow President GWB was responsible for getting Bin Laden, in ways that barely straddle reality as we know it. Sometimes, the degree of selectivity is pretty damn apparent, as when, just this past week, FOX cut away from the powerful speech of Gold Star father Khizr Khan, to air commercials. To "disappear" the patriotism and sacrifice of immigrant Muslim Americans. Because it does not fit the propaganda needs of the Mushroom Farm.

But when you consider the propaganda use in public as a proselytizing tool, and wed it with what we are beginning to understand of Roger Ailes' perverted and paranoiac world-view (where the queers were coming to get him, among other peculiar deceits) to what appears to have been a remarkably persistent pattern of using sex and sexism as a weapon to control female employees, the resemblance of Fox News to a cult becomes extraordinarily clear.

This is why the hair-raising use of a long-time employee, Lauie Luhn, in this particular way, which show signs of alienating and grooming in a predatory fashion a person so as to make her fulfill her necessary role in an org, isn't too much unlike the worst stories I hear out of, say, Scientology.

Once you start to understand Fox News as having the features of a cult, seeing them as the blathering weirdos down on the ranch becomes much easier to understand, and considering the content of their programming, helps to make one appreciate why a kind of counter-programming or even deprogramming might be necessary for people invested in the message produced.

But take a good look at that picture of Roger Ailes creating a sexual harassment culture, and consider the young women who just wanted to be journalists and thought maybe, this was how it was supposed to work. Because sexism is persistent outside of Fox News, too. But they seem to have made it a cornerstone of their ops, and I don't think they did so just because it was convenient or "hot" but because it leveraged people to be journalistically flexible, too.

I don't know the whole story, it's just that what I can limn makes me feel incredibly disgusted.
Posted by Vixen Strangely at 5:59 PM

Hi Vixen, I'm proud to report that I've cut my political observations back by about 80%. I think one could safely ignore the whole thing for about the next three months. Conceivably one could actually start to get some idea about who might win the election a month out.

So the upshot is that nothing but prevarication is going on on these major channels. Originally I had some hope for blogs to sweep in and try to present topics that were not outright distortion, disinformation, and prevarication.

Well, as one wit accurately put it in respect to blogs, “Once you get past the spin, the ego, and the narcissism, what's left?” And this is of course accurate, but what could one expect? No one starts a blog simply because they objectively want to report on news items. Even if they had a budget for reporters, bureaus, etc. If a person is motivated to start a blog it's because they have a desire to try and advance their ideas. Why else would anyone take the time and trouble? I can assure you that if I started a blog (occasionally toyed with the idea) it would simply be to try and advance my opinions and world view, not to objectively try and sort out other people's opinions.

So basically we are left without much news, and in its place are simply never ending spin, bias, misinformation, and outright lies. One of the effects is that the prevaricators mislead the public and conspicuously stay away from very important factors that should be weighed in the balance. Additionally our educational system is so bereft of knowledge about things like the economy, debt, and the global financial network that most citizens would not understand should anyone try to explain how we could be confronted with disaster.

Local news is still pretty objective for the main part, but what is conspicuous for its absence in the political realm is objective reporting and opinion designated as such. We really need a completely non-biased, non-prejudiced major news outlet that simply reports the facts. Today everybody just constructs false narratives and the fate of nations in the world then are determined by competing sets of lies.

A while back I was a juror in a high profile murder trial. Everybody in that courtroom knew more about what happened than the jurors. The prosecution and the defense each created a different mythological scenarios while holding back salient facts that would hurt their case. The jurors then had to decide on the basis of these mythologies the fate of a man charged with murder.

This is what I see going on in our political establishment.

I think there is truth in what you say--just like blogs like mine are a "curated" worldview, entire networks can also be. I sometimes also joke about how news organizations pretend to objectivity by entertaining the conceit that there are two valid sides --the "cargo cult of both-siderism". And yet, to maintain this façade, the show-runners of news programs have to go out and look for people who represent what sometimes is a very tiny minority of thinkers--the person all the way on the fringe doesn't represent a movement, but gets an airing as if he/she does, just the same. So if we see a shocking viral video of, say a puppy being kicked, some show runner will have to chase down a puppy kicking apologist. Even if we can mostly agree as a society that puppy kicking is just malicious and wrong. But this sets up a false premise that under some circumstances, why maybe there is an out for puppykickers. Saw it on tv, right?

(Nota bene: I am objectively anti-puppy kicking, and part of my rationale for blogging is sheer hope of social intervention; to weigh in against stuff I just can't not deal with--homophobia, theocracy, extremism (Islamic and other), racism, sexism, the murderous urge and making dumbass choices in the voting booth. I try to make sure that if I drop a fact, it has been fact-checked, and my spin is limited somewhat by my inability to do click-bait--you will literally never see me do "John McCain Obliterates Trump over Khan Comments" type headlines unless the Old Man literally got out a howitzer and did that thing. I am not a big fan of that kind of hyperbole.)

I wish civics classes were mandatory in public school and taught early--so that the vital connection between our mode of government, the freedoms it protects, and their intersection with practicing good citizenship, were better understood. Traditional "social studies" education concentrates a lot on American history, which for some reason has a beastly lot to do with covering the "explorers", and bloody little to do with the politics of reformation-era Europe--which probably matters a bit more in terms of how our system of government shook out than who explored what and when. And most history curriculae doesn't get as far as present time, leaving students with no sense of context for how questions like "states rights" "laissez-faire" or "supremacy clause" mean anything at all to their present world. This is deeply regrettable. I think some basic civics should be well-understood before one gets out of High School.