It Looks Like Voter ID Laws' Days Are Numbered 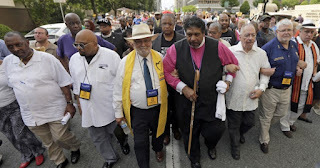 Voter ID laws have now been struck down in Texas, in North Carolina, in Wisconsin, and in Kansas.  This is despite the SCOTUS ruling that struck down portions of the VRA, and in particularly the North Carolina instance, a rebuke to the opinion of SCJ Roberts that racism is over, because the North Carolina law's justification was explicitly race-based. (As a GWB nominee, should we be especially concerned that he never was a fan of voting rights? After all, that administration was famous for thinking they should get people who didn't believe in voting rights so much as voting wrongs, even if this wasn't even an actual election-swinging thing.)

Now in the case of North Carolina, the justification for the NC voter restriction was explicitly race-based. But I wouldn't be surprised if NC and Texas, particularly, tried to bring their cases to SCOTUS.

But if these state governments want to push the issue to the Supreme Court, I'm 1) perversely glad Scalia is gone, and  2) wishing a Hillary-Clinton approved justice or Obama's pick, Merrick Garland, was in place.  It just wouldn't be regular for such an important issue to come up before a 4-4 court.

And some communities don't bother with voter ID laws at all and just resort to old-fashioned intimidation.
Posted by Vixen Strangely at 11:42 PM