Making History and Having More Balloons 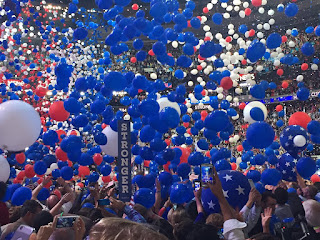 I'm on something of a DNC Convention high, which is basically the result of two weeks of so many political stories happening with a conclusion that is definitely past the bedtime of a Eastern Time Zone girl with a day job. But I blog because I love, and I have so entirely loved the DNC Convention so much it's like I can't even...

Because Hillary Clinton made history. Because even if she isn't the first woman who ever ran for president or who was on a national ticket--she's the nominee for president because that's how we Democrats voted, and she has way more experience, and a way better temperament, than her opponent. It is comparing Hyperion to a satyr, you guys. Trump was out there Thursday evening talking about he was still really gung-ho about waterboarding (nothing new, here) , while at the same time, the DNC had on the family of an American service-member who happened to be Muslim.  One party is lead by a man advocating war crimes, who has said before that the Geneva conventions, like NATO, is outdated--and another which is embracing diversity and honoring the reality of the human sacrifices of real people in our War on Terror.

Now, you can criticize her speech if you like.  After all, her outfit, whether she had a flag pin, her tone of voice, and whether she smiled enough were criticized, so why not talk about the substance of her speech? She reminded us of who she was--not a natural politician or "talker", but a certified "doer". We heard her bio from Bill Clinton and from a Shonda Rhimes directed/Morgan Freeman-narrated short.  We heard her speak about her passion for using policy to change human lives for the better in her own words.


You don't have to have all the love for Hillary Clinton imaginable (I do, though!) to know she simply outclasses her opponent in every conceivable way.  This DNC had star power, while the RNC convention had has-beens and takedown requests. But the DNC got under Trump's terribly thin skin when he acknowledged the DNC higher ratings by requesting that people who like him--not even watch the DNC.  Such a pricklepants.  (This, like the DNC having more balloons, coincides with Dems just having better donors and not having to beg Sheldon Adelson for funding at the last minute.)

The current President and former presidents are welcome figures at our DNC Convention--the RNC can't boast that. And even our schism is better-looking from the cameral perspective--Ted Cruz shanked Trump's unity bid with a sentence. When asshole protesters tried it during Hillary Clinton's speech, the chant of "Hillary, Hillary" proved what is possible when people under the Democratic tent unite, being stronger together. Against all comers.

Hillary Clinton's speech itself brought the bad-assness I wanted to see. She isn't afraid of bullies or terrorism and she definitely isn't afraid of Donald Trump.  She is grown as hell and will deal with whatever she has to. And I love her like the big sister I never had.

But I will drive this home--Donald Trump, if you can be baited by a Tweet you aren't fit--but we knew that. But she called you out as a man. Said you don't have the range? How do you respond?

Are your arms long enough, son?  Because you are boxing with a village now.

Posted by Vixen Strangely at 1:15 AM