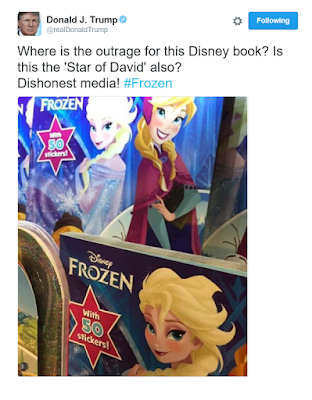 So, I screen-capped this amazing Tweet, because, you know, Trump has deleted Tweets before, but there is something sort of astonishingly disingenuous or maybe deliberately obtuse in not realizing that symbols have meanings in context. A Disney sticker book with a burst design that is a six-pointed star is not the same context as a politician with a background of hundred dollar bills and the word "corrupt", and neither are in the same context as a sheriff's star. His campaign seems loath to admit that they picked up the original image from an apparent alt-right user--as if it's some odd, hard-to-find secret that this is the audience his campaign has been actively courting! But no matter--Twitter is all over it, and Twitter does not forget.

It's very strange for someone to still be calling attention to what might charitably be called a "gaffe" several days later. If you want the "dishonest media" to stop talking about a thing, wouldn't you try to shut up about the thing?

But this is not his way, as a rambling speech earlier this evening showed. He doesn't let anything go--he just keeps counting his grievances on his little stubby fingers.

In other news, his campaign released some kind of dishonest figures about how much money they raised because they had to fluff it up with one week in May, making the correct June total something like $51 million, of which about $3.8 million was self-financing--which falls very short of Clinton's $68 million in fundraising. There's no ad tv ad-buys this past month. And Joni Ernst and Bob Corker have both said "Thanks, but no thanks" to VP vetting--I guess because both would still like careers in the years to come. I'm a bit bullish on Gingrich, but I have mad 90's nostalgia.

Otherwise the dumpster fire is giving off excellent heat, why do you ask?