Donald Trump's Campaign in One Image 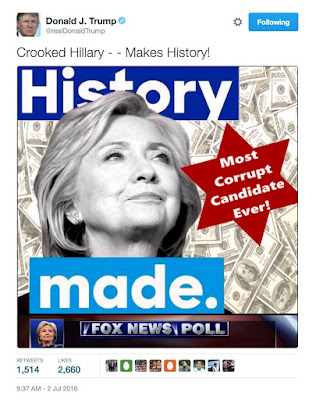 You could ask yourself, looking at the above image, "Why is the label 'Most Corrupt Candidate Ever!' placed in a six-pointed red star?" and possibly come up with a reasonable design explanation--the contrast of the red with the pale green of money, perhaps, or the thickness of the six-pointed star, sometimes referred to as the Star of David, itself being broad enough to fit the message. Except--except! Art choices don't just exist as design but within context.

This is disturbing, and in a way that I can't find accidental--not against the backdrop of Trump's history of insinuation. such as the thoroughly deceitful "Birther" dabbling.

I wanted to write a nice, dense, links-laden piece about the continuing dumpster fire that is Trump's inept campaign--the apparent collusion of his campaign with its lil' baby SuperPAC with the vicious name (after his book) Crippled America PAC. And how this was because of his campaign's lack of even basic fundraising savvy, and how both trickle down to a paucity of ground game. Take the difficulty of maintaining a professional staff: would you want to try coordinating surrogates on messaging when your own candidate has such poor discipline as to joke, in a paranoid tone, that Mexican planes are coming for him and he doesn't know if a Turkish reporter is "friend or foe"?

But see--it looks inept if you think of the racist bits as gaffes. The problem is there's too many of them for it to be plausible to any thoughtful person. This type of messaging has been excused by too many for too long.

Posted by Vixen Strangely at 10:30 AM