The Clintons Sure Get Folks Riled, Don't They? 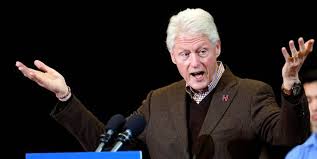 Call me amused about the "scandal" of the moment, where former President Bill Clinton and AG Loretta Lynch incidentally were at the same airport at the same time and chatted for awhile. It makes me laugh a bit because it's really the most Clinton thing ever--people who don't like the Clintons being ready to call "Corruption!" and some liberals who even like the Clintons wringing their hands over the optics.

You know that a chance meeting at an airport isn't exactly the most secure location for going around an investigation in a world where you can pick up a telephone and not even be in the same state, right?  Optics, schmoptics, that imaginary conversation where Big Dog leans on President Obama's Attorney General to "fix" a case for his wife is the stuff of rabid fantasy. And do you want to tell me that after being in the international spotlight for this long, everyone's forgotten Bill Clinton's basic personality? He's a friendly guy. Sociable. He can talk the bark off a tree. So it wouldn't have seemed strange or inappropriate at all for him to visit for a moment with someone he knows--I think that's just his way. He just meets with people. You could say he connects. The email topic would never have come up.

Now that this has turned into a cable news foofaraw,  AG Lynch has explained, as was always the matter, that she would take the recommendations of the experienced investigators on the case. And  what it's worth, former Secretary of State Clinton will be meeting with the FBI, which means that the investigation is proceeding apace. So I don't think there could be any appearance of any tampering with the results of the investigation from that top, and if the FBI is ready for Mrs. Clinton's interview, that should mean that the investigation itself is drawing to a close. I think expectations are good.

And we have no reason at all to suppose all the publicity sped things up in any way to maybe work on winding up loose strings before the convention?

I wonder sometimes why people think the Clintons are either stupid or corrupt when there is a much simpler explanation for everything. But since this is going to be the media drill from here on in, I think this was great practice.

Posted by Vixen Strangely at 9:52 PM