A Survivor and Witness has Passed: Elie Wiesel 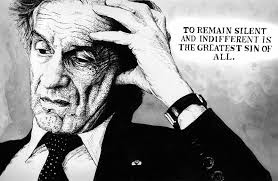 The passing of Elie Wiesel is terribly sad, because he bore witness to an enormity which, in my own lifetime, will have no one left with the immediate knowledge. When anyone with such a personal tale dies, it's like a museum of remembrance is ransacked. Elie Wiesel passed through Auschwitz, Buna, and Buchenwald. He passed this life having given witness to the worst of humanity, and yet, he understood that there was teaching in having survived and in making the choice to stand against horror. There was a gift in knowing that one had to choose. There was a substance in siding with life, and there was a meaning in hope. "Action is the only remedy to indifference".

Never. The lesson of Elie Wiesel's life is that there is meaning in speaking out about your truth and your oppression. He did this. The enormity of the Holocaust happened because people forgot how other people were human.  It is a sin to forget this important thing.

Here's our secular prayer: We won't forget. We will never forget.  The lives of those who experienced inequality and dehumanization at its worst, call us to grace them with a world of better understanding.

Posted by Vixen Strangely at 12:04 AM