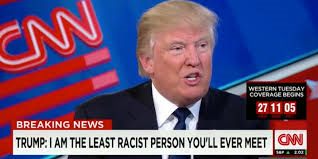 So, apparently, the graphic that showed Hillary Clinton against a background of money with a six-pointed star was not the failsauce graphic of a too-stupid-to-live Trump aide but actually just a super dank meme from the geniuses at 8chan.

Huh, Trump retweets stupid shit from white supremacists--how not random! It seems to me that the GOP might want to question the optics of something like that, you know, especially since some of Trump's good buddies from last week's stabbings, are planning to pay the RNC convention a visit.

That could get really awkward, you think?

By the by, it looks like Corey Lewandowski and Jeffrey Lord have both tried to say the star is just a basic symbol, like you might see on a sheriff's badge.


Attention ignorant trolls: the six pointed star has been a symbol of law enforcement in America....are you really unaware?
— Jeff Lord (@realJeffreyLord) July 3, 2016

Still such a great investment, there, CNN.

Posted by Vixen Strangely at 6:30 PM