Sacramento Stabbings Strike me as a Disturbing Sign of the Times 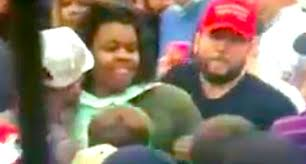 That a neo-Nazi rally turned into a melee where several people were stabbed strikes me as a very disturbing sign of the times. One of the spokescretins from the Traditionalist Workers Party, Matthew Heimbach, had previously made a stir by shoving a peaceful protester at a Trump rally, earning him a Washington Post profile calling him the "next David Duke".

This seems so superfluous to the Trump endorsement bona fides, which include the actual David Duke, as well as other "unwanted" white supremacist types. And yet it's kind of hard to divorce the upsurge in racially motivated violence from a campaign that has given so many jack-booted thugs hope.

It's also hard for me to separate "Trumpism" from the naked racism reported in the UK post-Brexit vote.

People act on what they see, and if they see it's "okay" (normalized in the media) to hate your neighbor, some simply will. They will act out. Leadership is understanding these forces, and not encouraging them. Violence like this is a sign of leadership abdicated, and loaded guns of rhetoric placed in the hands of emotional toddlers.

Anti-fascists were willing to take a blade today--think about this, anyone with any real power at all: what would you take to not have this kind of hateful idiocy be in your future? Because if it is permitted, it simply happens. If it is excused with words like "economic uncertainty" or "taking our sovereignty back"--it will engulf people who let it happen as well.

You are either anathema to racism, violence, and anti-intellectual thuggery, or you are taking part. There is no "sides". We have coexistence, or hate. "Mere tolerance" is just a thin grease of civility bound to erode or combust.

I am sick of how we ignore the real intolerance by trying to play "both sides" about it. It isn't a form of fascism to be "PC" and decry actual racists and Nazis. Calling racism what it is, or fascism what it is, and recognizing that both have a strong populist aspect, aren't  It isn't reverse racism when white supremicists are called what they are. It's just a descriptor, and racists crying about it are dripping with crocodile tears for their own guilty understanding that what they are about is despised, and yet here they are.

Is there a remedy for being called a hater when one actually hates?  Like, maybe not obviously hating?

I'd suggest another, perhaps alternative, perhaps parallel explanation for the upsurge in blatant public racism and bigotry. Over the last 25 years the forces of equality and diversity have been on quite a roll. Inter racial marriage is legal. Gay marriage is legal. Schools and workplaces are integrated. Discrimination is illegal. A societal structure that placed white males at the pinnacle has been evolving to one where they are just another identity group. And while you and I may thing this is a good thing, THEY don't like it a bit. So when a demagogue like Trump promises to turn back the clock on all this hated 'diversity', they latch on to the promise, even as they know in their black hearts it's impossible. Because the present has turned into their worst nightmare...

I definitely see the case for considering this a kind of backlash--a pining for the older days when things were better, and just coincidently, once could "call a spade a spade" to use a contexturally racist metaphor. And I don't think Trump is responsible for making people racist who never were before--maybe he's holding up a kind of magnifying mirror that just makes the issues of ethnicity/religion/orientation and gender ID stnd out more. But I would still say this makes him more of a "cheerleader" for bigotry than an actual "leader" in terms of someone fit to lead a diverse and already multicultural and in some ways open-minded society. I think most of the country is already ahead of his understanding about where the cultural lines are drawn--

What I fear though, is apathy. The certainty that some people might have that the contingent of actual racist, fascist, and misogynist folks in this country aren't significant enough to deliver a good portion of the vote, and that there aren't enough "go-along-to-get-along" folks who put party and ambition ahead of this country's needs to put this horse's ass over. When I see people pulling that "Dan Hominy" trick of imagining that Trump can be spinmeistered into at least a generic Republican--I'm pissed that it can even be played in the media as close, even though I know that if polls tell me Utah and Arizona are now in play--Trump can't win for shit.

There's a path for him. People forget to be outraged enough. People assume Clinton has it in the bag. I don't want a win for Democrats, I need an outright stomping for my peace of mind. I need the backlash to get a backlash. Because if there's even a hint of this being close, these Nazi MFs will keep trying it.

I have to disagree. There is NO path for him. Clinton does have it in the bag. Think about it Vixen - he'd have to win every single Romney vote and then find 5 or 6 million Obama votes too. He'd need to outperform the Romney campaign by 130 electoral votes - where is he going to find them? He's a fantastic coalition builder - but he only builds coalitions AGAINST him. Without minorities, gays, urban professionals, women, moderate Republicans he's actually going to significantly underperform Romney. There's just no possible way he wins in November. It really is over already - and the Republican party knows it...

I know, I know, I know! But I'm still not over the "pinching myself in perfect amazement at the priceless gift" stage regarding the endless dumpster fire that is Trump's campaign.