The Burden is Undue 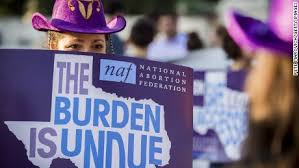 The SCOTUS decision against HB2 in Whole Women's Health v Hellerstadt might be summed up as: The right of bodily self-determination established under Roe v Wade should exist as much in practice as it does in theory. For pro-choice activists and proponents, this ruling reinforces what we always knew--that TRAP laws like HB2 in Texas were never predicated on what was best for reproductive health care patients, but only aimed at reducing access to abortion services. It was always a sham.

This ruling has set a precedent that may affect similar laws in 25 other states, including mine (Pennsylvania). It comes too late in many states where clinics have been shut down, and access might not easily be reestablished, which no doubt has already impacted the health care decisions of thousands of people.

But it can be reestablished, and this was the necessary point--unnecessary regulations that served no other purpose than to make it harder to access an abortion were determined to be simply wrong. The written opinion of the court delivered by Justice Breyer rests on the language of the previous Casey decision regarding "undue burden", recognizing that this is what, in effect the TRAP laws aim at. The concurrence, by Justice Ginsburg, makes the point of how they arrived at this decision clear:

Many medical procedures, including childbirth, are far more dangerous to patients, yet are not subject to ambulatory surgical-center or hospital admitting-privileges requirements ... Given those realities, it is beyond rational belief that H.B. 2 could genuinely protect the health of women, and certain that the law would simply make it more difficult for them to obtain abortions. When a State severely limits access to safe and legal procedures, women in desperate circumstances may resort to unlicensed rogue practitioners ... at great risk to their health and safety.

And we know at least that many Texas women are resorting to DIY abortions, which are not safe or sure.

This was a very meaningful decision, and I am relieved that they arrived at the decision that best respects the highly personal decision of pregnant persons with respect to their own bodies. Now, Lt. Gov. Dan Patrick might try and stick with his lie about what he thinks the aim of that legislations was, but sorry, fella. He doesn't give a good goddamn about women's health and we know it. He can kindly and gently and Christianly stick that noise where the sun and wind won't molest it.