Brexit, Pursued by a Bear? 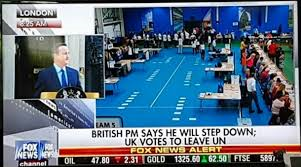 I'm a little bit at a loss as to how to write about the vote of the UK to leave the European Union, because the details of what it meant to the UK economical seemed to be a bit complex and regional and I'm over here on this side of the pond anyway, so it wasn't a thing I followed especially. What I do know is that the UK did not, as a resut of this vote, leave the UN--which some chyron entry person at FOX Mushroom Farm seems to have thought.

What is a bit concerning, though, is the possibility that people who voted for the UK to leave the EU did so without entirely understanding what they were voting for, and that some seem to, the very morning after, regret their vote.  The market freak-out investors faced on the dawn of this new trade reality probably was a bit of bracer that the economic ramifications might actually be extensive (although maybe non-UK traders should cool their jets, alright?)

And the timing is, in world news terms, pretty stunningly offset by the US Presidential election's own bete noire, Donald Trump, landing in Scotland (which voted to Remain) whilst praising the Brexit vote. As you might know, Scotland already thought Donald Trump was a wee daft tangerine bawbag of indiscriminate geography, but post-Trumpian Brexit commentary, they waxed Rabbie Burnsian, and some.  Because, and gather 'round, children, the fact is, Trump does not actually know shit about trade or foreign policy, and what he's saying about US trade policy and what he means to do to it is get "exity". Dissolve current trade deals and singularly negotiate new ones with each place on the strength of the kind of excellent interpersonal skills that made him so beloved in Scotland. Awesome-sauce! See what happened to the British pound on the morning after the vote when there's still the possibility that the MPs (who actually decide) can back out? What happened to markets all over?

Yeah, that bearish to-do will be much larger on the face of the coming of Trump to an economy personal to my actual readers (mostly US-Aians). Which is why I want to reinforce the necessary idea that elections do have consequences, yeah?  The UK might be able to adhere to the schoolyard tradition of "takesies-backsies"--but while I really think Trump's economic plan would be a first 100 days'  constitutional crisis,  he has nonetheless the potential to do real harm because he is, basically, a Thicky McThickerson. You can't even drill down to the bits of brain active enough to take on new info.

So that why I had night-terrors late Thursday--the implications of this kind of vote and what it signifies is not unique to the UK. And that doesn't even get me started on the semi-Fascist and racist parts. But they are there.  And I can't unsee them.

I recommend all US voters get very intimate with successful political-content Googling during this election year--it means a lot.  Don't wait until after the vote, or assume that some responsible pool of voters will just do the right thing so you don't have to. Doing right matters. It always does.
Posted by Vixen Strangely at 12:33 AM

A couple of comments:
1.) Financial markets actually didn't do too badly. A few percent in equities, a hit to bond yields, nothing near a 'meltdown'. The UK might end up in a recession out of the deal (next year, though), but the rest of the world is fine.

2.) It's true the pound got pounded, but people don't necessarily understand the meaning of exchange rates. We say a currency is 'strong' or 'weak', but that's describing relative exchange rates and doesn't mean anything. For example, we'd be a LOT better off if the dollar was a whole lot 'weaker' than it is today.

3.) The brexit referendum was non binding. Cameron already said he'd leave the Article 50 negotiations to the next government, so those talks aren't even going to START until next year - and once the terms become crystal clear, I can see the London government deciding to walk away from Article 50 and stay in the EU after all.

4.) Trump not only WON'T win in November, he CAN'T win in November. Just think about it: Mitt Romney, a perfectly professional, successful professional politician with a national constituency, lost the general election by 126 electoral votes and 5 million popular votes. With the Democratic coalition of women, minorities, gays, college educated professionals and even moderate conservatives who voted for Romney in 2012, anybody who claims Trump has a chance to win the White House needs to demonstrate where he's going to make up 5 million votes and 130 electoral votes. There's no way he outperforms Mitt Romney, so while he'll likely win over 20 states, he'll lose by more than 150 EVs...

Thanks for the perspective, Mikey--I needed that. I liked this part though:

" recommend all US voters get very intimate with successful political-content Googling during this election year--it means a lot. Don't wait until after the vote, or assume that some responsible pool of voters will just do the right thing so you don't have to. Doing right matters. It always does."