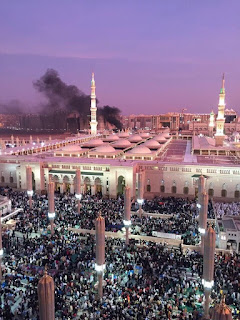 When politicians mistakenly insist that we need to identify the rise of ISIS/ISIL/Daesh, al-Qaeda, and other militant groups that formed within majority-Muslim nations as "radical Islam", they are using a framing that reinforces the claims those groups make towards being genuine practitioners of their faith and in some respects "disappears" the reality that these groups largely prey on Islamic populations.

Senator and former presidential candidate Ted Cruz has made this error, and current presumptive GOP candidate Donald Trump has made this language a particular criticism against the Obama Administration. It's basically a nonsense declaration, and the sort of rhetoric for which Trump is well-known makes him sort of a favorite among the terror-minded.

But when radicalized people make their assaults within Saudi Arabia, and particularly at the Mosque of the Prophet in Medina, then it becomes a little harder to say these are people who revere the culture and holy places of Islam. When we look at the actions of ISIS-claimed attacks in Istanbul, in Dhaka, and in Baghdad, it becomes harder to say that the war ISIS is waging is particularly against "the West". The problem doesn't seem to be merely geographical or religious--it is political and it is based in hate.

This comment by writer Xeni Jardin pretty much sums up what is incredibly wrong with the claim that ISIS is simply "Islamic":

All of these events during this holy month of Ramadan probably have their own political loci--but the character of their being heinous and also directed at Muslims suggests clearly, to me, that categorizing such terrorism as "radical Islam" is woefully incomplete. While it might be useful to address regional issues to some extent, the diversity and range of ISIS-claimed attacks makes understanding why they are happening basically useless in any religious context whatsoever.

These attacks are "radical" in the sense of being abnormal and violent, and "Islamic" in the sense of being carried out by people professing (for what it's worth) that religion. But they might as well be anarchists, nihilists, fascists, or any other-ists. To create such misery, their worldview is obviously trash, whatever they want to call it.