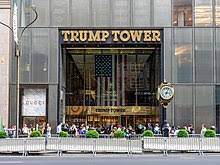 The conviction of the Trump Organization for 17 counts of assorted tax fraud charges is, to put it mildly, a bit of a setback for the presidential candidacy of former president Donald J. Trump, although of course, he's appealing it. And we can look back and note that the sad ends of Trump University and the Trump Foundation didn't scathe Trump's image as a successful (and definitely not a con artist) businessman. (They totally should have.) It's hard to say that what should be a bit of a (to use a term) legal coup against a corrupt real estate scion is even the beginning of the end of Trump--the man, the myth, the mofo.

But why not say it is? Because whatever is going down around him--it isn't good.

I wonder about little gestures in TrumpWorld, like the revelation that Trump's lawyers have a team investigating whether there were still classified government documents to be found on Trump properties, and while they did find a couple in a storage unit, they are pretttttttyyy sure Trump's usual haunts are clean.

My favorite bit is where the FBI decline to watch the search:

The team also offered the FBI the opportunity to observe the search, but the offer was declined, the people said. It would be unusual for federal agents to monitor a search of someone’s property conducted by anyone other than another law enforcement agency. Federal authorities have already searched Mar-a-Lago, Trump’s primary residence, and he spends almost all of his time at those three properties, advisers say.

They would like to watch a search at Trump Tower or Bedminster, is my guess, but doing it when expected is not how this is going to go down.  I just have the vague suspicion that this story is Team Trump trying to get out in front of something.  I mean, Trump;s lawyers say he's got all the clasified docs out of his sstem but they've been wrong before, right?

They probably are not heartened to know that the Special Counsel is definitely looking to see how Trump's campaign (and Administration) inserted itself into the election process of various counties. It looks like Trump's people were moaning about stopping the steal, while actually trying to pull off a steal. In fact, even before the voting, Trump's subgenius namesake was certain that the presence of Republican legislatures made overturning the election a sinch.

Is there any wonder, then, that the 1/6 committee will be making criminal referrals? Which will include Trump?

And let's not forget looking into what exactly Trump's son-in-law was doing with his ample foreign policy portfolio.

Anyway, now that Trump has entered the 2024 contest, supposedly the RNC is no longer footing the bill for his legal fees, but maybe that could change? I guess I'm bringing this up because the GOP should probably look at the balance sheet and ask themselves whether Trump is doing them more harm than good.

In other news, one of Colludy Giulianis' little Russia agent friends just got indicted for money laundering, which is a great time to remember that anything fished out of the river by this compromised halfwit is likely an op. (*COUGH*laptop).

It's amazing how, even out of office, Trump has so many stories, and none of them great, about who he is and what he does. It's almost like he is bad, and he looks bad.

Goddamn, could that be a thing?

(Should I mention that Mary Trump is still feeling litigious, and Trump should probably go ahead and offer up his DNA re: the E. Jean Carroll defamation suit because refusing that, too, looks bad? I mean, unless,.. the truth of his DNA wouldn't set him free? I am just saying.)

We haven't spoken in years but I have it on good authority the only reason my little "brother" got paid for all the gold lame work he did in that penthouse was the movie company making a movie about the devil paid for it. The double irony is he's a xian nutball ...

i feel like i should but i do not know , what does twgb stand for?

It's "TrumpWorld Grab-Bag"--I just got tired of spelling it out over all of the posts I've done.