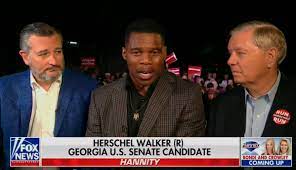 As we get closer to run-off erection day in Georgia, I think it behooves us to consider the man, the candidate, the father, the phenomenon, that is Herschel Walker, who said out loud where people could hear that young voters (those under 31) are like immigrants and have no business voting to try and affect things.  That's a weird message to have when young voters could be deciding this election.

But then again, he's also the person whose campaign decided right on the heels of a shooting at an LGBT nightclub that a transphobic ad was entirely on point.

The problem I have with all of this isn't that he will probably lose--but that he's a candidate at all and I am forced to say "probably". The Republican party, as currently constituted, gives absolutely no fucks whatsoever about the quality of their candidates, only having the quantity to retain some kind of power.

They could run a cardboard standee. It would be less trouble than the actual Herschel.

The guy lives in Texas, he's got a series of broken homes behind him, and he wants to be a werewolf.

I am not sure I can even WT enough AFs about this candidacy. I will say the RNC is weak and useless and can't vet or influence winners and lets capricious monied arseholes run weird dark horse bets because why the hell not? Who cares? It's only our democracy.

UPDATE: Also, he lives in Texas if I didn't mention it (I mentioned it). He isn't so daft he doesn't know where he lives, right? He just doesn't live where he is running for office.

Somehow, the RNC and the former president who endorsed him did not pick up on that. Or care. Either/or.

Their confidence in a thoroughly rigged election may well be well placed ...