DeSantis and the Debts 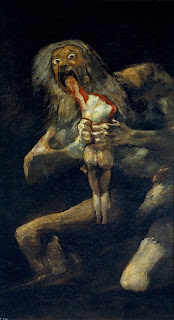 In Pennsylvania, where Dr. Oz and Doug Mastriano are contending for US Senate and the governorship, respectively, former president Donald Trump has a nickname for a certain governor of his party up for election in Trump's own current state of residence: he calls him "Ron DeSanctimonious." And why not? Trump is spoiling to run for president in 2024 himself and wants to kneecap other contenders who have forgotten who he is.

Now, the reason why Trump wants to run for president in 2024 might understandably be construed to be in part his belief that being a political contender will wash away some of his legal woes.  We've known that for more than a minute. He doesn't need to run to prove himself--he has been in the White House. Even if he lost. And was impeached twice....What he does need is to manufacture the kind of pre-emptive immunity he once had when he was in office.

But what he doesn't want is some upstart who came to office on his presumed coattails (today, what should have been an unraveled bolero, if the media and Democratic messaging could get on the same page about his fall from grace) to supplant him.

And Ron Desantis, who toadied with croaking and sticky-tongued fidelity to win in Florida, has decided to trip the light Olympic and set his cap among the stars, declaring that he's God's gift to politics.

On behalf of millions of people, never stop fighting for freedom. pic.twitter.com/5wcopo041U

On the nth day, the creator endowed me with an amazing gag-reflex, but I sputtered a little over this one. Sure, it's serving "God created a farmer" energy and also, those various t-shirts from the kind of twee probably mostly foreign labels that appeal to millennial wine moms who decorate their houses with wooden signs with inspirational calligraphy and are advertised on Facebook.

As far as Trump can see--DeSantis owes him. All the young Republicans do. Which leads me to once again ask--What is the play? Because you can't suck up to Trump if you want to topple him. And you need to finish him to get over him, and no Republican seems to have the taste for it.

Does DeSanctimonious have the stones? He's ambitious, wants to be liked, and loves to retcon history. He's already earned dictator cred. He's earned the support of bigots and punched down at LGBT people every chance he can get and smeared their allies as "groomers".  He's thumbed his nose at science and history alike. (He's done a lot to reinforce my personal prejudice that the Ivies socially promote unfit conservative students because they would rather not deal with the stink they would raise if flunked for just poor all-around scholarship.)

I think DeSantis might not have the stones. I know Trump thinks he doesn't. But I'd like DeSantis to try it because I am not too sophisticated to watch a little bloodsport.