Sometimes a Flute is Just a Musical Instrument 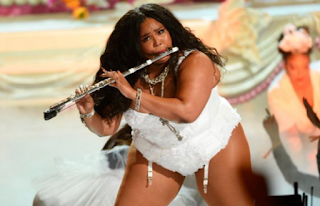 Sometimes I struggle with the diagnosis of being "terminally online". I prefer to think of myself as only "critically online". What I do know is, as a blogger, I don't love that my blog muses occasionally insist on my dealing with whatever messed-up thing is going on with the Online Discourse.

I try: "Please," I bargain. "Let me do other stuff. The Discourse sucks. The people are terrible. I hate it here."

And the answer I get is hollow, mocking laughter. "This is the price you pay for your remit: the culture, white supremacy, radicalization, misogyny. Do your thing here, or we won't let you do the other stuff."

And there I am.

So, for some reason, the right wing online freaked out because Melissa Viviane Jefferson, an American musician and actress known for her ability to play the flute, was invited to play a 200-year-old crystal flute once owned by James Madison that was being stored at the Library of Congress. That's right, a modern popular musician who has done as much for the flute lately as, I dunno, Ian Anderson of Jethro Tull or Chris Wood of Traffik (look, folks, I am not young anymore and rock music only ever does so much flute) played an instrument that it would be a damn shame to never get played again, and the racists got all up in arms.

My "favorite" dumbass comment is probably this one from some guy I never heard of named Pedro who was just openly racist: 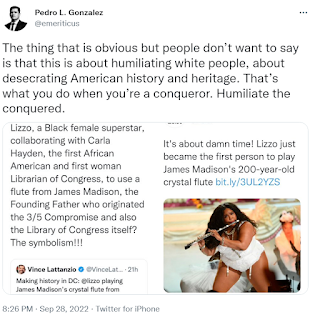 He said "The thing that is obvious but people don't want to say is that this is about humiliating white people, about desecrating American history and heritage. That's what you do when you're a conqueror. Humiliate the conquered."

It isn't obvious. This wouldn't humiliate white people who weren't unrelenting racists. She's literally a musician playing a musical instrument. She's an American, She's respecting the awesomeness of playing an antique historical artifact. There was no conquering or desecrating. She just played a flute. It was made to be used by musicians. The entire world this terribly online creature lives in is grievance-based and for no reason at all.

What he's saying is: she used the wrong water fountain. She sat in the wrong bus seat. He wants to take her existence as an accomplished musician receiving the opportunity to handle a unique object as an affront, but by doing so, can only point to her race as the reason for his discomfiture. Because that's all the outrage is.

The flute is just a flute. It's old, it was owned by an historical white guy. But nothing about her spoils the flute--how? She didn't jam glue into the holes, she didn't break it in half. She only handled it like an artist would. It was made to be played by someone, and not playing it ever would be as bad as some cabinet full of the "good china" that languished, never used at supper, because no one supposedly special enough to eat off it ever came around.

And the victimhood! We white folks are supposed to be mad someone not white touched this bit of history. Newsflash: Black Americans are Americans. Don't know how this basic idea went wrong, but there's this whole thing called birthright citizenship from after the Civil War, and if it fucks you up, well, fuck you. I barely relate to music made outside of the 1990s or early 2000s, but Lizzo is pretty cool and I'm happy, and by no means poutraged, over something that isn't anything personally offensive to me. (Because I am not a thin-skinned little snowflake looking for reasons to get wee-weed up over ID pol.)

Also too, there is Jenna Ellis, fart-snuffer, who has to remind us Lizzo is fat. Jenna Ellis should be disbarred for trying to help overturn a legitimate election and promoting a fraud that significant voter fuckery existed that would have somehow affected the 2020 presidential election when that was not true in any respect. She's a toxic idiot at any size, and my own personal fat ass isn't offended by her thinking "morbidly obese" is a useful slur because a shallow child like her can only reveal her own insecurities and project her own fears. It is far better to be a big person who has some knowledge than a size 8 fool.

The discourse is stupid and signifying disdain for a Black woman of size as if there was a war to be waged over whether her identity somehow detracts from the idea of history seems to me entirely brain damaged. She's a musician. She played a musical instrument. What the whole entire fuck?

Oh and Ben Shapiro think twerking is somehow the real outrage--and I don't know. He has some funny output about Black musicians, female sexuality, and I think he got toggled to 45 RPM when he should have been set at 33. Anyways, here is some twerking from the 1920s.

Shapiro is some kind of advanced fuddy-duddy. He's like squaresville, man. 23 Skiddoo.
at September 29, 2022

Rock music nurtured a bunch of flautists. Ian Anderson leads the list, of course, but in Jethro Tull he plays almost as much guitar (being the songwriter), and his original instrument was the harmonica; he picked flute just to look different. Peter Gabriel similarly played flute when he was the frontman for Genesis. Chris Wood was the other kind of flautist, a sax player who noticed this other instrument with very similar fingering but very different sound. (There are boatloads of jazz musicians that play both instruments.) And then there was Steve Katz, guitarist for Blues Project and then Blood Sweat & Tears, who also played flute, and wrote himself a nice little melody called "Flute Thing" that he recorded with both bands. Punk rock made it unfashionable to play serious instruments, but not long afterward, Annie Lennox of the Eurythmics played flute.

I never realized Peter Gabriel did the flute--I thought that was studio musicians! I love realizing rock music has more sophisticated instrumentation than people think, like:

I remember being enthralled hearing P-Diddy's sample of "Kashmir" come to life in collaboration with Jimmy Page himself and an orchestra on SNL and being like "Whoa".

Our popular music is denser and more interesting than just the throwaway thing critics think it is.

I am only vaguely aware of Lizzo. What i have seen, i like. She's an artist. She has studied and knows how to play the flute. She was given a great honor to play this particular flute. She played well, and I'm proud of her. What is the problem?