The Frustration and the Future 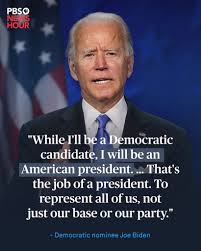 Without specifying any particular dig or complaint against Joe Biden, I'm just going to give it to you straight, folks--he said he'd try to be president for all of America, and that meant he would extend his hand to Republicans because it's their country, too. He was Barack Obama's Vice-President, and he knows very well what these people are, or for goodness' sake he ought to. These are the people who called his president everything but a child of god and denied him the ability to replace Justice Scalia.

I'm disgruntled about Republicans from that, but I have been pissed at Republicans since I realized who was cozying up to the theocrats back in the 1980s and realized, circa Iran-Contra, that Watergate was no fluke and the GOP simply did not consider the Democratic Party valid. Post-1/6, still extending anything at all to Republicans feels like a trap.

I want Biden to acknowledge he gets it. It is tiring to continue with the pretense that things are okay and Republicans are going to come around. They won't. They tried to steal his election. I understand why he thinks he needs to do it, but the math isn't working for me. Either acknowledge that the GOP is a dumpster fire who will never do anything good for the people of this country or any of the states they are in charge of and will put an end to democracy as we know it in a heartbeat, or just keep pretending some kind of deal is possible with them. But don't think for an instant that doesn't bring skepticism.

I dunno--if we have to throw the fate of this country to the voters because Manchin and Sinema have fucked up every hope we had of even basic shit like raising the minimum wage or tossing out the filibuster for the big things, which message is clearer? I'd go with telling the truth on the GOP--and it only is the truth, after all. The GOP will only make things worse. They will never be held accountable if left to their own reckoning. And "cutting deals" with them is probably stupid (I don't understand what the benefit of two KY prosecutors are vs. a lifetime bench appointment for an anti-abortion judge--do we think the prosecutors are going to do something extra special? What democrat likes the sound of this?)

I'm not so Twitter-brained that I think my social media feed is the actual mindset of the whole eligible voting poll, but I think Democratic messaging suffers from a failure to talk to the people they want to vote and assumes people just know what they are supposed to do and knows what the wins and losses columns look like. The GOP fan-services their brethren. I think the Democrats could better talk up their successes and trash talk their opponents' failures. I think Reps. Swalwell and Gallego and Sen Schatz do this really well. I know that that sort of thing is ephemera. But it keeps the faithful bucked up. And attitude matters. I think you all need to see the Twitter of Bill Pascrell. He doesn't ever let anyone forget that the GOP doesn't vote for the things the people need. And he's damn right.

The Democratic party is, even if they don't message especially well, the best chance we have of saving democracy and keeping the US sounds as, well, a dollar. I want them to express how they figure to do it, and to call out the rascals more. I understand (some lefty) people are frustrated, and that's why they need to hear something to make them stay motivated. It's only logical that they should, because who else do you see out here that will hold back the theofascist tide? But people aren't always logical. You have to show you are in it. You need to show you will do something and there is a plan.

Just get honest about the danger and state what solutions we have. It would do a lot to allay the frustration and let people understand what can be done about the future. That's all people really expect. To be dealt with like they have a stake and their political representatives get it.

Yes, this sort of thing:

He ridiculed Senate Minority Leader Mitch McConnell (R-Ky.) for threatening to scuttle legislation designed to boost semiconductor manufacturing. He called a plan from Sen. Rick Scott (R-Fla.) “shameful.” And he triggered boos from the crowd at the mention of the name of Sen. Lindsey O. Graham (R-S.C.).

I personally feel like most of the people rankling at the "just vote" message are 150% actually planning on voting--but I think they are carping because they understand that not every voter has the same level of investment and they need to hear the president actually fighting. I wish being a Democrat was less of a "herding cats" thing, but...cats respond to a can opener.