Kandiss Taylor, polling in the single-digits, is unlikely to overtake the heavily-favored Brian Kemp in the Georgia GOP gubernatorial primary this Tuesday, but I finally put together into words what is especially horrifying about what this woman is saying--her full-time job is educator. She has a doctorate from Regent University. Her understanding of American history is essentially Dominionism--Christians came to America, conquered, and now, should run the government, to put it in the almost simplest terms.

She herself has boiled it down even more simply than that. Her campaign's slogan is "Jesus, Guns, Babies".  In light of her above comments indicating that our founding fathers committed genocide for Jesus and the recent conversation around great replacement theory, her slogan starts to make a lot more sense, especially so when considering that she will be appearing at an event with Stew Peters, Mike Lindell and Lauren Witzke--her brand is based in White Christian supremacy and grievance. Worship Jesus, shoot "others", make white babies. 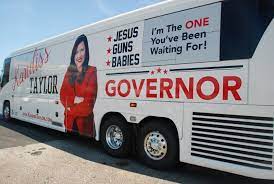 It comes off as almost comical in a sick way because she's so blatant, but it's dangerous because there are Republicans who share the same view and put it forward much more subtly. (Although the mask slips when they call liberals anti-religion and anti-family for actually calling for separation of church and state, anti-racism, and recognizing non-traditional families.)

It also reminded me that the recent movement of "Jericho marches" derived from the Book of Joshua, which depicts God-sponsored genocide. It is a very uncomfortable thing to see theocracy so nakedly, and so clearly insinuating violent tactics are Jesus-sanctioned, but I think this is exactly what I'm looking at.

As I have observed elsewhere, I'm pretty sure the natives don't see it that way but take solace in the knowledge that the men of the time would have silenced her. No doubt with a stake and several bundles of firewood.

Gene, so help me, I have seldom seen someone so veal-calf sheltered from the outside world but so utterly read into the black-helicopters/WHO/UN domination level deep bullshit conspiracy weeds. It's like she was made in a lab, and for all I know, some area of Georgia is exactly the lab for this level of propagated horseshit. MTG was probably a beta of this specimin.