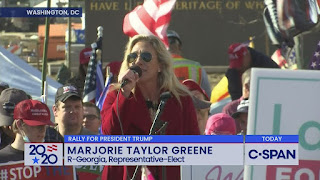 So, raise your hand if you are in any way surprised that Trump, the loser of the 2020 presidential election, called his stalwarts at the Willard Hotel on 1/5 trying to prevent the certification of the election from happening. Right--nobody reading this blog at this point, I would think. After all, if you read the news that Trump's bestest little 1/6 buddies at the Willard also had gotten burner phones, it really starts to look like the White House was coordinating with the rally and the rabble-rousers. And they really wanted to postpone the certification as if something else could have happened.

Like, they were hoping the Eastman memo was going to be a thing. No really, it's dumb and it also seems to check out.

This pisses me off. I totally blew the stupid alternative electors thing off at the time as being about stupid hopeful people being stupid and hopeful, and assumed the White House puffery of same was just about "keeping Pappy happy"--the bullshit geld you had to pay to stay in Orange Tyrant's good graces. But now it looks like those alternative slates were purposeful and not some random grassroots fuckery. It was totally about having those slates in play for when/if Mike Pence decided to play ball.

I thought they were crazy but shit, they were doing what they considered a calculated move. And now we can make sense of Trump and Giuliani's and probably Lindsey Graham's frantic calls to various state election officials. Like the infamous Trump call looking for 11,780 votes. They wanted to change the result that much. Trump couldn't stand losing that much. The Republican Party could not stand losing that much. (And now the 1/6 committee had had a great conversation with Brad Raffensperger. )

And still Trump lost. And now his privilege claims are weak, especially since I don't think claiming that the release of records will embarrass a former president should be germane to a question of whether the failure to embarrass him is a failure to acknowledge an ongoing national security threat. (Which is exactly what the pretender's claims to the presidency amount to, now. A disruption in the vital process of state functioning. Not that he cares, being a malignant narcissist, but that we, the American people, ought to, extremely matters.)

As a side issue, Sidney Powell's Defending the Republic has been subpoenaed because grifting. Because obviously. And I'm so unsympathetic to her grift. No matter how well she fronted that she entirely believed in it. I'm appalled that Republicans still want to construct weird theories about voter fraud being some grand Leftist scheme, when most voter fraud looks exactly like this.  Rare, astonishingly dumb, and Republican.

Look, Trump wanted the riot. He had reasons. He encouraged it, and encouraged others to encourage it. This was "Mr. Stand Back and Stand By". But the 1/6 riot was not the whole crime. It was that he wanted to steal the presidency from us, the people, the people who saw through his purposeful neglect of enacting real measures to abate the spread of Covid-19, supposedly to protect the economy, and the utter failure of that strategy, that so many died, and also so many jobs were lost. Rich people, his people did fine. And he forgot the forgotten people in favor of yacht folks, the boaters' parades.  And like an ass, he never understood that the mail-in vote that he demeaned as beneficial to Democrats would have benefitted him also--if only more voters were willing to mail in votes for him.