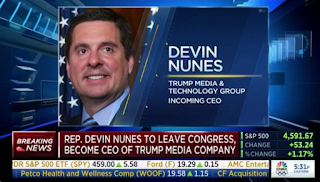 You know, it's not for me to question the ethics of a congressman who announces he's leaving the US House right about....now-ish, because he already has a really plum job lined up. It might look like he cast around for a job because his new district didn't look as friendly. Sure, some people might say that the only reason Trump wants Devin Nunes on board is their political relationship (and Nunes' abiding loyalty to Trump) but I don't know. He does have recent media experience, if you want to count trying to sue Twitter and a parody cow account.

Hm. I don't know if that goes against the branding of Trump Media & Technology Group as being all about the freedom of speech, but that might be the least of the problems with anything bearing a Trump brand.

My original take on Trump's media group is that it's got some big scam energy. Looks like that's not just me--the SEC is very interested in how this plan came together. There's good reason for it besides Trump being involved at all, but I've got to say, when you've got a twice-impeached former president who is going around still making Big Lie noises about the last presidential election, and that guy just happens to be someone who can't operate a charity anymore, ran a fraudulent "university" for six years, and has always been kind of money-laundering adjacent in his business practices--I mean, really? This guy whose Trump Organization is under indictment? Whose taxes may have been fiddled for years?

I just have a hard time believing that really honest people would be putting their money where Trump's mouth is. It seems like the offering always was about employing the One Weird Trick of knowing when to dump out of it. But then again, some people do put their trust in Trump, I mean like Deutsche Bank--they were always willing to give the sucker a better than even break. Maybe Patrick Orlando just likes the cut of Mr. Trump's jib.

Ah, well, people do stupid things with their money I guess. The poor trusting souls, they are.

So much scam energy I think Devin may find himself missing his cow.

My feeling about the $1 billion value is that it's like Trump's version of minting his own version of the $1 trillion dollar coin. It has that value because Trump has certain debt deadlines and well...it needs to be about a billion.