She Does Have Children, Though 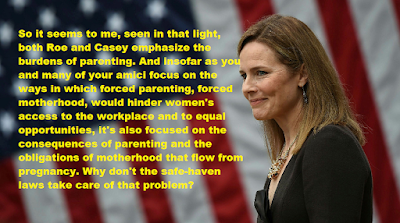 It was just last year that I asked the facetious question on this blog: Oh, Does Amy Coney Barrett Have Kids?  My point was that looking to her personal narrative and ignoring her stated biases was a mistake. So consider this quote from her recent inquiry regarding the Mississippi law banning abortion after 15 weeks:

"So petitioner points out that in all 50 states you can terminate parental rights by relinquishing a child after [birth], and I think the shortest period might have been 48 hours, if I'm remembering the data correctly. So it seems to me, seen in that light, both Roe and Casey emphasize the burdens of parenting. And insofar as you and many of your amici focus on the ways in which forced parenting, forced motherhood, would hinder women's access to the workplace and to equal opportunities, it's also focused on the consequences of parenting and the obligations of motherhood that flow from pregnancy. Why don't the safe-haven laws take care of that problem?"

How does one account for a mindset that seems to be that life starts at conception, but parenthood doesn't start until birth? Separating the burden of pregnancy itself as a part of parenthood creates a false state where a person considering an abortion is not a parent because of an intention not to bear and raise the resulting child. But how can that be? If the embryo or fetus is a separate being, the person who carries is unquestionably, a parent of that being. Parenting starts with the decision to carry or not, though--and for all reasonable parental reasons, such as wanting a child to have a healthy, good life that the parent can't give it. And no, carrying for nine months and giving up the child is not the same thing.

How can she appear unaware that the state of pregnancy, before birth, is a state that results in employment discrimination and heightens the risk of partner abuse for the pregnant person? Or that pregnant people can face housing discrimination. Is she so ill-acquainted with the legal system that she understands why the law is no immediate remedy for these issues even if laws against domestic violence and housing and work discrimination on the basis of pregnancy exist, and that a pregnant individual can face poverty or physical danger during the course of that pregnancy?

And how can she be unclear regarding the reluctance a pregnant person has to relinquish parental rights regardless of personal repercussions? The fear of what happens to the child you carried from an early-term pregnancy to the viable and separate entity whose destiny is not now within your control--it is a consideration. That one's child is not readily adoptable for reasons that pregnant person's understands far better than the court. The fear that bad people will abuse this child and not give it a life better than it would have faced with the birth parent. Once born, the emotional burden of parenthood isn't easily disposed even if the physical burdens can be.

And of course, pregnancy presents a physical and financial burden that persists beyond delivery. Beyond the merely peculiar changes that can persist after birth  (although "merely" seems dismissive--the hell no, these are also pretty major!) for a pregnant person, there can be chronic issues, such as gestational diabetes or high blood pressure (even including kidney damage) that don't resolve just because one had relinquished one's parenthood rights. That body has changed. The US has a high rate of maternal morbidity and mortality for a developed nation, which is more pronounced for minorities. The high cost of financing pregnancy for all of us, and for the individual.

It could be possible that she is not ignorant at all of these things, but they never entered the eternal sunshine of her unbothered ideals. Your set of facts about mothering for bodies and persons that have apparently not been her don't concern her in the least. Your poverty, or addiction, or chemical requirements, or persistent social threats, or daily hustle are not her business, so much as servicing her Procrustean notion of what your uterus should be about.

The goalposts have been radically moved from whether the burden to acquire an abortion is undue, to whether we even acknowledge pregnancy itself is the burden one has a right to medically be released from. And yes, more personal choices will be restricted with this kind of thinking, just as Sonia Sotomayor strongly laid out. The burden to make a family with the adult partner of one's choice. The burden to persist and be gainfully employed while queer.  And for reasons that can not be anything more than a religious view, not one rooted in facts, but beliefs.

This seemingly innocently-worded question on Barrett's part and the way every pro-choice person understands it is a disturbing view into how so-called pro-life people have erased the person who is pregnant in the abortion equation. Justice Alito suggests the debate is about balancing the interests of the mother with that of the fetus--as if the fetus has an interest at all! No. No interests, no hobbies, no politics, no small talk, no rights: because tell me, what does this fetus know, dream or believe that isn't the projection of anyone else?  The unviable fetus shouldn't have any rights greater than the actual person whose legally recognized body it is occurring in.

And she was chosen by Trump for just this kind of reasoning. And it it is so dishonest it chills me, because she could easily be another 40 years on this court.

To those schooled in The End Times she is clearly the Bride of the Antichrist, the Whore of Babylon ...