Researching Your Ginormous Balls Off 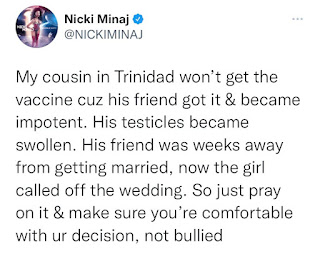 Maybe it's wrong of me to doubt that Nicki's cousin's best friend's balls blew up (at 31 Flavors, so I guess it's pretty serious) but unless the vax came with a side of chlamydia, I'm guessing that the wedding was called off because friendo was raw-dogging karma and it bit back. I only snark here to make a point--she is saying "pray on it and make sure you're comfortable" and isn't saying she won't get the vaccine ever, just not now and appreciated that some people do have to get it for their job. That's not anti-vax, and it's definitely respectful to people who have reservations, but...

I'm so tired of the vaccine hesitancy because the worst case scenarios of the virus are just way worse than the anecdotal evidence out there about any problems the vaccine might have. I'm talking about parents passing it to their little kids and losing them so young. Or families with young children suddenly becoming orphans. Pediatric COVID-19 deaths in the US have remained in the few hundreds, so it's rare, but we don't know what the long-term effects on these kids could be. The US is 4th in the world for children orphaned by COVID-19, with well over 100,000 kids with lost parents.

So I guess what I'm getting at is, doing research sounds smart--the rational thing to do, and all. But I think people who start to research what might be wrong with the vaccine start to forget to weigh it against what we definitely know is wrong with COVID-19, and it's a hell of a lot.

Like, for one thing, it is definitely killing people. Contrary to what the hardcore hospital-protesting crazies want to say, which seems to be that somehow, health care workers are actually contriving COVID-19 deaths for their own nefarious ends.

(I have never been a fan of turning rubber hoses on protestors, but you know...they pose a risk to public safety and welfare and are interfering with the care of all kinds of sick and injured people, so I see what they are doing as basically terrorism against patients and healthcare workers. But once we allowed anti-abortion protesters space to harass healthcare workers and patients at clinics, this is the creep you get.)

It has also caused increased lost pregnancies and loss of maternal life or increased risk of serious illness for obstetric patients.  And while there's no evidence the vaccines cause reproductive sterility, there is a risk that COVID-19 can.

So I get it--people want to be smart and not screw their bodies up over the risk of a disease. They are doing "research". But the thing is--are you in medical school? Because I promise you, people who have done years more study on infectious diseases and immune response are already on this one to save you a lot of trouble, and they definitely know more than your local conservative radio host or camera-hungry political blowhard or even the pastor you might not have recognized till I just said so is kind of authoritarian and not actually a genius. Maybe give the experts a little credit for putting in the work long before this crisis developed, and realize that evolving situations can mean that advice changes a bit. It's because more got learned. It's like if your local weather people didn't think there'd be a lot of rain in your area but now all of a sudden they want to say "flash floods". Why did they change their minds? (The evidence of a fuckton of water, dipshit, turn around don't drown. A situation developed.)

So I guess what I'm saying is, the urge to research isn't bad, but don't let your balls get too big for your britches.

And FWIW while I'm here--how in the hell did the mask thing get controversial? People breathe in germs through their faceholes. They breathe germs out through their faceholes. Obvious fix--cover faceholes. It's not even the kind of science that needs math. But if you like that sort of thing--there's a study. Good lord people, what the whole hell is all the denialism about? (I know--fear and control, but as a mammalian coping mechanism it sucks out loud.)

Posted by Vixen Strangely at 1:25 AM