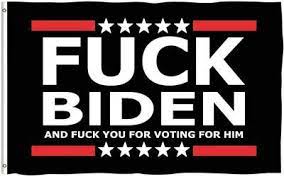 I travel through some goddawful trucknutz suburban territory on my commute, and have seen some weird things literally minutes outside of Philadelphia, like III%-r flags and coal-rolling rigs and oh my stars and garters the unnecessary size of these fiberglass and steel pants-monster substitutes, but I think the most interesting one to me is the guy with the twin bedspread-sized "Fuck Biden" flag draped on the back of his vehicle parked in front of the new Dunkin'.

Now, as for me, a femme with a long commute, I opt for complete political vehicular anonymity. I believe in no bumper stickers, and I have a visceral reaction to flags hanging from cars at all. Especially American flags, and hear me out--I get that people after 9/11 were sometimes sporting those little plastic mounted US flags on their car for purely symbolic and personal reasons, but that thing metastasized.  There's a way the US flag is supposed to be displayed, and I always felt a little like if you have it on your car, it's not a great deal better than having Old Glory on your shorts. For one thing, it's flying in all weather, and fumes, and schmutz. It gets all grey and straggly, looking like the whole War of 1812 fell on it. And also, at some point, it's about someone making a statement about their love of their own idea of their own patriotism, not their love of country. It's making the flag all about you, Karen.

But I did have to give it up for the "Fuck Biden" guy. He's acknowledging Trump lost, and it's because people like me voted for Biden. This is a meaningful concession. Now, he thinks Biden and I should both get fucked, and since we both have spouses for that, that's okay. My spouse and I share a political POV or we definitely wouldn't have been together so long, and Jill Biden gets to sleep with the lawfully elected President of the United States. We are lucky girls, no question.

I also have to admire the vulnerability to come out and admit the expression of pain, here. This election hurt, and this human being wants everyone to know, everyday, on his or her but let's face it, probably his, commute, every day, that he is raw hurt by these election results and needs to soak his chapped nether regions in chilled buttermilk every night from taking Trump's loss so personally and viscerally and unlubricated by any respite from people like me, who will not even concede that Trump, the traitorous one-term wonder, was good for any single thing,

Not one. I assume he's biodegradable, but if he was used as fertilizer, even the corn would come up stupid. Not one thing. I will even concede that Hillary Clinton is a liar before I concede one good thing about Trump, because in a debate she was asked if she could say one good thing about Trump and she said his kids were alright, and fuck it, even they are not (reserving, as always, the possibility that Barron might turn out some kind of okay, or that he has a decent by-blow out there). I literally rank Trump lower than COVID-19 and bot flies because he's capable of intentionality. And you see what he's done with it.

Anyway, fly that flag with pride, brother. I appreciate your openness and vulnerability. Nothing satisfies me like seeing someone seethe with contempt for my liberal existence but have to cope in a world where there's demonstrably a whole lot of us. And enjoy the horse paste--it doesn't taste exactly like apples, but it might taste a little sweeter than your own "Biden won the election because of people like me" tears. (Does the flag wipe them away? Could it?) And if you're vaxxed, thank the dude whose administration actually had a rollout plan because even Trump fans matter in his world. I couldn't say the same thing about how Trump managed COVID-19 in his administration.

He literally had his virology peeps do election fraud stuff. And blamed libtard states for being hit first and hardest--like we weren't all in the same boat.

He lost. I know it--the Fuck Biden guy knows it. The Cyber Ninjas know it. Even Trump, pretending to be delusional, knows it, in his heart of hearts. There's a flag on a bigass truck that can never be desecrated because it is, itself, intentionally obscene. And it stands for failure.

LOL ~ M Bouffant, of Just Another Blog From L.A. (AKA Web of Evil (& Ennui)) and this week hosting Mike's Round-Up @ Crooks and Liars, for the entirety of the Trump Maladministration had as his banner a photo of a big pickup with a big "Fuck Trump and Fuck You for Voting for Him" patch in the back window. I've got a copy of it around here somewhere, posted it myself a few times. Makes me smile when the damned fools can't come up with anything new, or original.