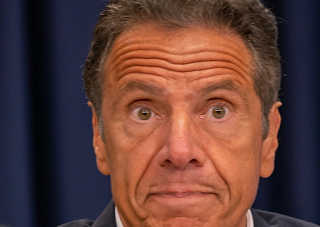 There was a moment today when I thought, very briefly, upon hearing that Andrew Cuomo was going to make a statement at 1 p.m. after the details of the investigation into the allegations of his sexual harassment had been made public, that maybe, just maybe, he was going to do the right thing. Surely, I thought, like a poor innocent fish, he's just taking a minute to draft his resignation comments and will be getting his ass out of office with some basic dignity intact because if he tries to hang on, shit is going to get nasty from here on.

He certainly did no such thing. He made a disgusting appeal to his age and ethnicity and tried to maintain that no, everyone just misunderstood him: actually, he is a big supporter of women. The current throughout--these lying women are just trying to jam me up. With no explanation of what set them off (other than the simple truth) or how their coming forward about what they went through benefits them in the slightest, except that he not be in a position of power anymore, and not be able to continue to do harm.

And here's the grotesque thing--this was a prepared statement that came along with a montage of Governor Kissyface showing physical affection to a wide assortment of people, as if to say, see? This is just how he is. How can you imagine that any of this was inappropriate?

Well, thanks to the visual representation, I can imagine it a bit more vividly, so thanks for that. It's astounding. Someone cut that together and thought "This is helping." But clearly, that was put together before AG James' announcement.

He also released a refutation of the allegations that was obviously also put together before the announcement. Meaning he sat through this investigation not thinking it would exonerate him at all, but knowing that if he wanted to stay in office, and he surely seems to, he'd have to have ready answers to troubling questions. He did that knowing full well what those allegations entailed and how and why they were troubling. And it never once occurred to him that leaving was the right thing to do, and that this wasn't about what he wanted, but what was good for the office of the Governor, for the state of New York, for the Democratic party, for his staff, to show even some brief acknowledgement that he understood what was wrong with this picture. To show he knew what responsibility and accountability are.

So from here, from his arrogance, his failure to do the only decent thing that he could have done, which was, just moments before he went live at 1 p.m. eastern, decide to bow out gracefully and accept the possible criminal charges (because of the cover-up, another sign of knowledge of guilt) and possible civil liability (because talking shit about those who came forward is also heinous and folks may have lost jobs in that process) and just chose to let the state of New York have someone else but just as competent (if not more) and without the baggage be governor, he's going to face an impeachment brought about by very popular acclaim. He's being dragged by any Democrat who has a conscience and any Republican who has a pulse.

He chose ugliness today. But this ugliness has been his way, apparently, for some time.

And in other disappointing things, his brother tried to help him with his media strategy instead of telling him to straighten his ass out. Chris Cuomo may have done that for family loyalty, but massaging his brother's political rep isn't journalism, and reflects badly on CNN. I don't know that they need to kick him to the curb, but he needs to be off air at least for some serious reflection.