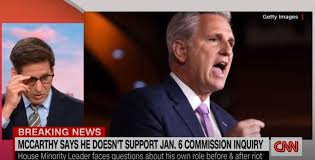 The coward, Kevin McCarthy, pulled all of his 1/6 Select Committee picks because Speaker Pelosi rejected two of them.  One of the rejected picks, Rep. Jim Banks would have been the ranking member, but demonstrated right from the jump that he had no business being on that committee with the actual words that came from his very own mouth. The other rejected pick, Rep. Jim Jordan, is such an obvious Trump Renfield that his selection by McCarthy is transparent sabotage. It is obvious that the selections were chosen with the expectation that someone was getting rejected, which was every bit Pelosi's right to do so as not to turn this important mission into a clownshow (which is becoming something of a GOP specialty.)

In other words, Pelosi was under no obligation to swallow McCarthy's shit, and his performative outrage about it is tiresome and staged. So of course, some political pundits treated it as if McCarthy got what he wanted (he would rather shutter the whole inquiry down, and he hasn't actually denied the committee the ability to be  as bi-partisan as he has allowed it to be). The reason the committee looks the way it does right now is because Kevin McCarthy could have had an actual bipartisan committee and told he members not to take the best deal they were going to get.

That's all on him. Every bit of it.

So even though the taxpayer-salaried trolls may decide they need to perform a really stupid and futile gesture or two, as they did during the first impeachment, the inquiry will go on. The people who want to sniff about it for not being as bipartisan as it could be can just go ahead and do that (some would have no matter what the committee looked like) but need to bear in mind whose fault that is--

Just like we all know the big lie that sent the rioters to the Capitol was Trump's fault for spreading the big lie, and also the fault of some GOP party leaders for egging them on. It would be nonsensical for the committee to have people on it inimical to the goals of it, and who are also participants in the goddamn mess.

All McCarthy has truly done is demonstrate his own unfitness for leadership, deep moral rot and invertebrate weakness. There's nothing there to applaud.

Generally I don’t go for that sort of stuff, but I am morbidly curious to see what kind of dirt on McCarthy Trump inherited from Jeff Epstein [assuming Ep is dead].

I don't actually think McCarthy necessarily has dirt--as with Lindsey Graham, who a lot of people also suspect of being extorted into being a little toady, for some men being gutless followers seems to come naturally. I remember when there was some freedom caucus kerfuffle over removing Boehner from Speaker (for being negotiating with Democrats) McCarthy was *not* the hard-core conservatives' favorite, and so they also started or passed along a rumor he was having it off with Kristi Noem. But I don't gossip, so I don't know anything about that. :)

". . . for some men being gutless followers seems to come naturally."