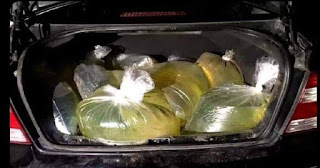 This week, scads of people formed huge lines at gas stations filling up containers that had no business holding liquid fuel because of a very temporary supply hiccup. Because of the kind of country we happen to have, this was characterized in the media as President Biden's problem. Which is kind of is, as in, his administration had to deal with it, but also is wasn't, in the sense that a major driver of shortages was panic-buying because people with a very particular set of political skills used the opportunity to make this about energy policies that had nothing to do with what was...to be perfectly clear...a criminal hack on our gas supply infrastructure.

This kind of thoughtless, kneejerk jerkery has unfortunately had badly destructive consequences, already. (I'm going to leave alone whether the owner of a Hummer already had some wasteful notions about gas consumption, and ignore whether or not a lit cigarette had anything to do with the conflagration.) I can easily imagine worse situations--storing this fuel in sheds or garages, leaks, sparks, fumes. And accidents while siphoning the badly-stored fuel into gas tanks. I guess if it all makes it into cars there isn't too much risk of serious damage that your fuel filter wouldn't catch--but that's an "if" and I don't know if I'd want my garage-baby nursed on petrol with drowned dust-bunnies in it. (I'm no mechanic, so I don't know what the repercussions of a sludgy fuel pump are.)

The "Joe Biden's Green New Deal caused 1970's-like gas lines" stuff reminds me a lot of this February's "Joe Biden's Green New Deal caused Texas energy failures". It was another weird bunch of lies that seem to cohere around not understanding how anything works and wanting to blame libs when anything goes wrong. And yet some people accept that kind of twaddle, as poorly-stored and unsafely packaged, combustible and laden with debris as it is.

Which makes me wonder just which kind of American gasbag is ultimately more dangerous. While the damage isn't as obvious as a melted suburban assault vehicle is, I worry about the bullshit in our rhetorical gas tank.

UPDATE: In the interest of not being a part of the problem while trying to be part of the solution, I'll concede the above picture is not from this crisis. But yes, the panic-buying was real, and ill-considered. And the government isn't telling folks not to put gas in plastic bags unless that nonsense was out there.

Too damned bad a few of 'em didn't blow up.

I think the stranger thing is that most of them probably know it's all made up and they pass the stories on anyway. There is something very juvenile about the way Trump and his supporters go about getting things done in the world.

Not to mention that the GOP has become a giant all-encompassing con job operation. Like a lot of things, Trump didn't start it, but he made it a lot worse.