More Evidence For Your Lying Eyes

Andrew Clyde (@rep_clyde), the person screaming at the far left of this photo, is the person who recently likened the brutal, wildly out of control, deadly violent Jan. 6 insurrection on the U.S. Capitol to overthrow the will of the people, to a "normal tourist visit." pic.twitter.com/bs4twxu1lZ

The photo above shows that Clyde in action, apparently taken aback at the actions of the tour group that came to visit back on January 6. In retrospect, from the numerous still photos and videos compiled from that day, it really does seem like something was a bit out of the ordinary--doesn't it? Take a look at that picture in the Tweet--what were Rep. Clyde's lying ears telling him he was hearing?
Rep. Louie Gohmert wanted to have us believe that the January 6 melee wasn't an "armed insurrection" because no one supposedly had firearms. Which I guess would be true if you didn't count the people with guns. I don't know for a fact if Gohmert can count though. Maybe he wasn't aware there were guns and felt disappointed, since he apparently has called for a revolution.
Women for Trump PAC founder and former Tea Party Express chair Amy Kremer is deeeeeeep in the denial on Twitter this evening. She doesn't know a damn thing about insurrections and anyway, she doesn't think Trump supporters are that stupid, so why would we? 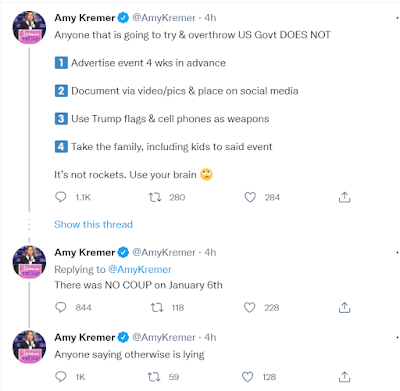 Is she trying to claim she didn't have a good enough seat and couldn't see any of the action? Because she surely had all the access she could have wanted. She's right that there was "NO COUP" of course.
It failed like everything else Trump touches. But yeah, they really did try it. And the damn dummies took selfies the whole time they were doing it.  That;s how we know they were dumb enough to advertise 4 wks in advance, uh, document it as we saw in abundance, watched them beat up cops with Trump flags and yes, take their families, because yes, they are dumb, and what the fuck else did they do it for? Shits and giggles?
Sure, the right has become awfully cozy saying things like "The tree of liberty is watered with the blood of patriots" and insinuating that lobbing leftists into helicoptor blades would be ideal and also, funny as hell, and are even trying to legalize running people over with automobiles for the crime of marching for civil rights, and we're not supposed to think maybe, yeah a little, they were going to try to kill elected officials as they also have threatened rather a lot?
Maybe they are worried we have seen them a little too well. Maybe they are loathe to take a look at themselves. But facts are facts.
The truth matters. Trump lost. His followers lost their shit and are still in shitloss mode. And if we want to keep our republic, we need to take a very goddamn good look at it.
Posted by Vixen Strangely at 12:03 AM