Where Angels Would Safely Tread 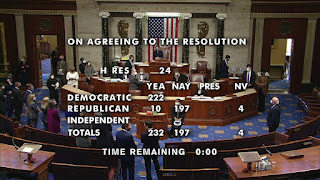 The morning after Trump's latest impeachment, what I still find extraordinary is that GOP members of the House still managed to claim that the impeachment was "rushed" as if, after the passage of time, somehow, the attack on the Capitol by Trump supporters at an event called "Stop the Steal" regarding his and only his election, Trump's conduct would look...better? I can't recall who, but one bright spark even asked why they were voting without hearing from witnesses--look around you! These are your witnesses! Your colleagues!

He was literally sitting in the midst of the crime scene, wondering aloud "What happened?"

So, obviously, the co-conspirators of Trump's weeks-long effort to persuade everyone that his election has been stolen from him have every reason to sit there and side with him. But save for ten brave souls, the end results only suggests that there were SO MANY of them!

I would also like to note that I can't help but scoff at the people who anonymously have stated they were afraid of death threats regarding the impeachment vote--is that not another example of where Trump's rhetoric leads and why it has to be strongly denounced? What about conscience? What about independence? Send the details to the authorities and keep in mind this is nothing your Democratic counterparts haven't been dealing with all this time.

This episode will, I feel certain, only look worse with further investigation. The question I have is, how bad will GOP lawmakers also seem in the rearview mirror?

Posted by Vixen Strangely at 7:25 AM