TWGB: Some Paragraphs on a Commuted Sentence 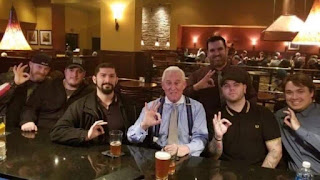 Roger Stone is depicted in the above shot having a pint and giving the white power sign while surrounded by the colorful group known as the Proud Boys. Old Rog is alleged to have stood for whatever a first degree Proud Boy is, which is where I think they still let you wank. Sometimes you need thug friends, I guess, when you need battles fought on the mean streets of social media, I mean, like the ones your friends are still allowed on.  Which is a paradoxical place to be in when one is also a guy who just gets his sentence for seven counts of assorted obstruction fuckery commuted by the actual president, after sentencing tampering by the AG itself just wouldn't do.

And lets not golf clap too hard for Bill Barr, who says he didn't think Trump's clemency order regarding Stone was a great idea--it's not a great idea, but he doesn't think that for "rule of law" reasons--it's optics. It looks bad--because...have I said this before? It is bad. Barr previously did urge for reduced sentencing but called the prosecution of Stone "righteous". What Trump has done undermines the DOJ. It practically screams: If you are of use to this president, he has got you covered.

So let's talk about what's wrong with the statement the White House put out about the rationale--and how impolitic and purely political it happens to be.  The statement leans heavily towards Trump's regular assertion that the entirety of the Russia investigation was a "hoax", but the entirety of it is not, even if the actual collusion with the Trump campaign part were. The DNC hack and the subsequent leaks by Wikileaks (regardless of any extent to which Roger Stone might have had advance knowledge and shared it with Trump himself) were real, as was the disinfo scheme that promulgated fake news on social media. Special Counsel Mueller made a rare op-ed to reiterate the legitimacy of this investigation.

But here's the funny old thing: let's say old Rog didn't know as much as he claimed, he just made bloody good guesses. He heard about the hack, likes to pretend he's got connections, reached out to Wikileaks, but really didn't have an "in" with them, yet anyhow, did tell Trump (and probably Jared Kushner, who was working the digital campaign with Parscale, yes?) he sure did know something that was going on about that mess. The campaign wasn't exactly colluding, but Trump and'em thought maybe they really could get the good dirt on Hillary Clinton and the Democrats? (Just like Jr's unfortunate line: if it's what you say, I love it. They wanted those emails so much. You guys! So much!)

See, what Stone knows and wasn't telling is how much Trump was obsessed with those emails, but we know.  But what he could tell is what he said to Trump and to what extent he knows Trump lied to Mueller and that gets Trump's entire ass in trouble. It's sleazy as all hell and for everyone who wants to start up with that "First time non-violent offender" shit, he did violence to the entire process by being a lying asshole. And he threatened a witness (and his little dog, too!), and he threatened the judge, so not violent, but not like, non-violent either, And his reasons for claiming he got railroaded involved smearing a juror to get her ass in deep too, so. I have no sympathy for the situation he was in at all.

This is how the mob would cover up shit if the mob had the powers the Constitution granted Trump. It's bullshit and the only really good solution is Trump gets voted out so hard. I guess there are reasons aplenty to try another impeachment case that this time involves the Mueller investigation and gets right at the heart of the Trump administration's fucked-up legitimacy, but the hour is growing late and there are other fish to fry.

But between you, me, and the entire internet? Yes, this is more obstruction of justice and more perversion of the rule of law from Trump, and hell yeah, it's exactly why he needs to be out of office so he can face the damn music.

UPDATE: Or is this whole damn thing incompetent like the rest of TrumpWorld? (Is not a lawyer and doesn't play one on the blog, just asking.)


Per DOJ, Stone wasn’t even eligible to apply for commutation:

“To be eligible to apply for commutation of sentence, a person must have reported to prison to begin serving his sentence & may not be challenging his conviction in the courts.”