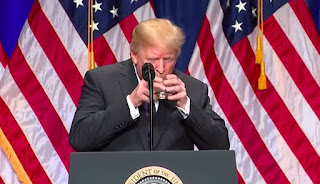 The transcript is here.  For one thing, Trump absolutely took the time to congratulate himself on having a national security strategy, even if he did not read everything he endorses.  He might be a little confused about what the actual popular majority of Americans voted for, but he is clear on one thing--the last couple folks to do his job definitely screwed it up.

Nation-building--he isn't about that thing. Nope--he will lay waste to countries with terrorists and those people who were terrorist-adjacent can go screw. (I'm not sure this is an adequate extremism-prevention plan but...) He describes unclear missions--I wonder if his thoughts about these are not like the failed raid in Yemen and the debacle in Niger? He doesn't like tinelines for exit in areas our military currently operates--he is comfortable with indefinite missions.

He repeats his NATO lie about our allies "paying their fair share". He describes the Iran nuclear deal as "disastrous", although I don't know that any disaster has actually occurred. He fails to understand how pulling out of the climate and certain economic deals actually weakens our hand because the US word is not assumed to be as good as it once was, because there is no continuity.

He says he will defend the homeland like no one ever--fuck him.  He says he'll secure the borders, but is he going to up Coast Guard interdiction and inspection? Will he use the government to protect us from harmful imported goods? Probably not. His boasts about deregulation leave us less domestically safe, and his tax cuts aren't compatible with paying for renewed infrastructure.

He takes the time to give a couple paragraphs to espouse his bigotry against immigrants, implying they are the true source of terrorism in this country and more dangerous than our homegrown variety (not by several lengths, no). He congratulates himself for the success in beating back ISIS by continuing Obama's strategy. He congratulates himself on his containment strategy for North Korea, which has done nothing to actually abate their belligerence.

Aaaaand, long-time readers already know I think Trump is to foreign policy what the vacuum of space is to aerobic health and well-being. So above is a picture of Trump sipping water from a tumbler clenched in two hands because he does not want to get water on his very long tie because his hands are probably shaky. This isn't entirely his crowd. And this isn't entirely his material. But this is his presidency--entirely.

Posted by Vixen Strangely at 2:13 AM