Is a Deep State TrumpWorld Grab-Bag a Thing? 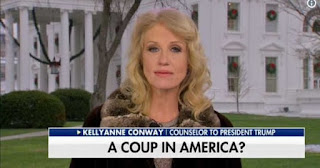 Fox News' very awful Jesse Watters had on the Trump Administration's even more awful KellyAnne Conway, and together they managed to perform a duet on the theme of there being a coup attempt on President Trump, and how, boo hoo, everything was rigged against Trump from the very beginning. I love this kind of argument. Trump was trying to soften the blow of his possible loss in the election all through October 2016 by crying "Rigged!' whenever he could. And then he won the electoral college despite losing the popular vote by 3 million votes, got sworn in, and is still in office. It doesn't seems all that "coup-y".

What has happened, though, is a recent obfuscation campaign on the part of Trump associates and supporters to detract from the Special Counsel's investigation, claiming that the FBI investigation that it follows on was tainted by partisans.  This strikes me as really weird. Comey was a Republican, Mueller's a Republican, as of a year or more ago, we understood that the FBI has a lot of people who were not Friends of Hill. Since when was the FBI or law enforcement in general a hotbed of subversives who want to overthrow a Republican president?

Except when that president is engaged in a potential criminal conspiracy to undermine national security. See, I can get why law enforcement professionals would deeply care about that.

Part of this kerfuffle seems to have to do with the thousands of Trump transition emails that SC Mueller seems to have quite lawfully obtained. The GSA basically got a nice polite request for them and handed them over, because they are already government property. To the chagrin of Trump's lawyers, who seemed to have tried calling executive privilege on these emails when I'm not sure they could even necessarily do so even once Trump had become president (the executive), but most likely couldn't assert before he was sworn in.

I don't know. I majored in lit, not law. But, as with claims that Don Jr. could stay mum about a conversation with his Pops and call it attorney-client privilege just because the Trump's were in the room with lawyers, I think an executive privilege argument might really need to have someone involved who was actually the President. It seems a little dodgy. Also, I think the problem with the trove of emails Mueller and his team got is that whole lines of inquiry may have been obtained by knowledge gleaned from those emails, and Trump's lawyers would very much like those to be thrown out as if they no longer were any good because the emails themselves weren't lawfully obtained, but I'm not even sure that applies for the purposes of this investigation. I am mostly tickled that a campaign that had so much to do with Clinton's emails, has an email problem of their own, like the actual details of record retention and government access were never issues they cared about at all.

Anyhow, in other news, we learned that the FBI warned Trump during his national security briefing in August of 2016 that Russia would be trying to infiltrate his campaign to gather information (this would be a period of time, as when isn't it? that Trump was denying the Russians hacked the DNC or were responsible for trying to break into the election process at all). But as for the "being told" part acting as a warning for the Trump Team (as if everyone involved was already simple enough not to know you don't accept baggage from foreigners and carry it onto a national campaign) well, that ship had already, based on the time-line, probably well and truly sailed.

Anyway, maybe things will be a bit clearer after Trump's crack legal team talks to Mueller and his folks.  All I know is, all hell is fixing to break loose if Trump fired Rod Rosenstein, who Trump did appoint, and is not a Democrat, as a segue into getting Mueller fired. No, I am not advocating a violent kind of all hell breaking loose. But it would look as very much like more (yes, I said "more") obstruction of justice than has already been tried.  And that will put feet on the street.