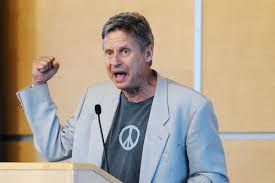 I have personal experience of people who are not especially political for whom trying to choose between Trump and Clinton has become a hardship because for some reason, their education and sampling of news media has left them with a deficient read on signal to noise ratio. Some of these people sort of admire Gary Johnson, because he actually has been a Governor, which gives him some executive experience that Jill Stein has never had, and a lot of what he says seems pretty chill. Pot and guns--yep. Interventionism--nope. You see that peace symbol on his shirt and think to yourself: well, he might not be a terrible person because I can suss out where he's coming from.

Yeah. About that. If you were a Bernie Sanders supporter, take note that he is with Her--and that his agenda is better represented by Hillary Clinton than any Libertarian would ever be, because both Sanders and Clinton understand that huge undertakings require acts of government to smooth the path and make way for positive change. The Libertarians are not statists. They don't think government has a responsibility to act on the part of the people (regardless of how they  might have voted for action). This is important. Say you are an activist on any front: school choice, the environment, remedying social and legal inequalities, economic justice. His path basically says that you are on your own, and his idea of government will leave you to it. If there is bullshit enacted abroad he isn't interested, because his idea of peace is not about making aggression stop--it's about not pressing back against aggression. Call me a neoliberal all you want, but there are some kinds of aggression out there I think does need to be pressed back against--wisely, and not completely without knowledge--

And this is the scary part--he doesn't seem to have a sufficient understanding of current events or historical events--a broad concept of the American narrative, that would enable him to do this thing up proper. So he chokes on stuff like Harriet Tubman or Aleppo. He can't think of a current world leader he sees as admirable.

This is the kind of well-roundedness I want from a potential presidential candidate. I admire Justin Trudeau and Matteo Renzi. They are relatively young guys with great backgrounds in understanding government as public service, and they are optimistic and try to make things work better for their understanding of "better" for the citizens they serve--also with the understanding that they are world citizens--that the interests of their own nations are their first priority--contending among many. I understand that there are players throughout the world whose personalities and interests come into play when one is trying to make foreign policy happen--does Gary Johnson?

What I'm saying is, if you are going to vote for Gary Johnson and are liberal, why not pencil in "Vixen Strangely" if you want to cast a meaningless vote? I never was governor of anything, but I know what Aleppo is, who Harriet Tubman was, and can name world leaders I respect. My nom de blog doesn't actually represent a real person who will actually be president--but then again, neither does Gary Johnson. So there's that.
at September 29, 2016