When You Lie Down With Rats 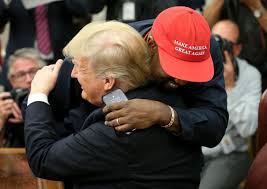 I think it's pretty clear that Kanye West isn't a real candidate for president in the strictest sense--in his own words he knows he isn't:


However, he was reticent to criticize Trump besides that. “Trump is the closest president we’ve had in years to allowing God to still be part of the conversation,” he said.

And West was eager to criticize Biden, and expressed comfort with the idea of doing damage to the former vice president’s White House chances. “I’m not denying it; I just told you.”

I guess that's dependent on whether Trump stays in office, even if it's through dirty tricks like siphoning off votes via puppet candidates. Not to call Kanye West a puppet per se, but when there's a little rat hand up your behind making you talk, what else would you be?

Posted by Vixen Strangely at 12:02 AM