Just in case you thought Biden's candidacy was going to be anything other than completely nuts, team Trump has released a new video. #JoeBiden #KamalaHarris https://t.co/GjAC8VDaVF

Who are these people and why do they think this is respectful of a man who died because of the damn Trump plague? Because I don't know how Mr. Cain felt to the end, but in any respect, just go post on your own account. Go do your political shit on your own account. Because this man died of a disease that should have been contained by a responsible government action, and was actually spread further because of gross negligence. I don't know if this account is handled by anyone connected with his estate or if it is in the hands of some political dweebs who worked for him. But there is something ghoulish about his digital skin trying to discuss anything as "completely nuts" when a man we know to be deceased is apparently plugging Trump from the beyond.

I don't care that someone says it--it just feels fucked up to do it under the name of someone who passed. Pardon the flippant blog-title, but I dunno. Maybe this continuing to be a Trump stan account as if Cain was not deceased after a somewhat long and preventable illness feels like no, someone else is being way more flip than me. 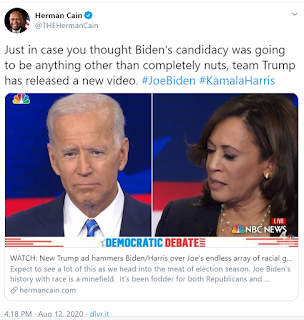 bringing a screencap if someone has the presence of mind to delete the weirdness. Because I saw what I saw and so did everybody else who saw it.)
Posted by Vixen Strangely at 1:02 AM