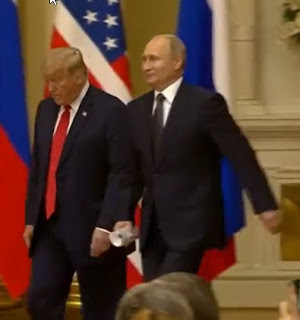 
WASHINGTON — American intelligence officials have concluded that a Russian military intelligence unit secretly offered bounties to Taliban-linked militants for killing coalition forces in Afghanistan — including targeting American troops — amid the peace talks to end the long-running war there, according to officials briefed on the matter.

The United States concluded months ago that the Russian unit, which has been linked to assassination attempts and other covert operations in Europe intended to destabilize the West or take revenge on turncoats, had covertly offered rewards for successful attacks last year.

Islamist militants, or armed criminal elements closely associated with them, are believed to have collected some bounty money, the officials said. Twenty Americans were killed in combat in Afghanistan in 2019, but it was not clear which killings were under suspicion.


what else is there to conclude but that, having known about it since March, and having in the meanwhile spoken, presumably quite amiably, with President Putin, having suggested Putin be invited to the G7 summit, other than, among the options considered for dealing with this piece of intelligence, Trump most strongly considered "hoping it never came out" and doing--nothing? After all, wouldn't being pressured to confront Putin during an election year be ever so inconvenient, what with all Trump and Putin have meant to one another?

Just recently, in an interview with CBN, Trump accused former president Obama with treason, without elaborating on what he meant by that. (Although I tend to think it focusses on his wild notion that Obama had Comey "tapp" his phones before the election.) If one were to suggest Trump committed treason, I assure you some people would have to ask "Which time?" Collusion during the election with foreign efforts to destabilize election security (about which more information has recently come to light)? His open support for Putin's denial of that effort in Helsinki, the denial of an act which could be considered an act of cyber warfare, over the honest assessment of the US intelligence community? His interference with aid to Ukraine in a way which would both aid Russia and influence the 2020 election? Or this most recent passive position, this time in the face of Russian efforts to harm our military in an actual war?

That Trump speaks bigly but carries a very small stick is something I have commented on previously. I have called him a "groveling shit" and I am steadfast about that assessment. And while I may hold John Bolton's book in some contempt for being a cash-grab instead of an honorable and effective unburdening of himself with respects to the harm Trump's errant and self-interested approach to foreign policy goes, I really don't find details like stomaching concentration camps in China for the Uighur Muslims if they would only buy soybeans to help his ass out in the election to be unlikely in the least. And that same attitude early on regarding the coronavirus--considering the response Trump still has to the virus even now concerning the likelihood that there will be a massive death toll acceptable to him, that is already unacceptable to so many of us.

Trump has a very weak character, a poor understanding of history, current events, geography, you name it, and he is intensely concerned with winning. Personally. He doesn't put America first--it is always Trump first. But his presidency always comes back to "Russia, Russia, Russia." And things like this are exactly why, and that he can do so little about them is exactly why he should not be given another term.

And losing the election is the very least I think should happen to him. But as for Putin, I see him and Trump like a small man with a large dog. Even though the man is small and the dog is large, the man is the master of the dog because one is a man and the other is an animal that belongs to him. But would that man be the master of a large animal that most certainly does not belong to him? And still less would he be master of another man who was entirely on to his malarkey. And that's what I think about Putin.
Posted by Vixen Strangely at 1:47 AM