Trump is a Groveling Shit

I really wanted to post something with a better title than "Trump is a groveling shit". The idea that Trump not only had to boast to Lavrov and Kislyak in the Oval office that FBI Director Comey got deep-sixed over the Russia investigation is one thing, and the Helsinki declaration that Trump believed Putin regarding his strenuous denials that there ever was any interference (over the intelligence provided by our own people) is another. And now this little phone call, initiated by Trump, to declare to his good buddy Putin that the Mueller investigation seems to have cleared him?

A 1.5 hour call that made Daddy Vladi smile. How fucking nice. Maybe they talked a little about Venezuela and maybe they talked about the price of cheese in Milwaukee--my impression is that Trump is a groveling little shit. He wants to tell us he thinks it is very good that he has a nice relationship with Russia and a nice relationship with China and it's all about trade and you know what?

They scare the shit out of him because he doesn't know what he's doing, and that's exactly what makes him a groveling little shit. This isn't strategy, unless the strategy is constant retreat. Appeasement much?

Take North Korea--please! We all know the Trump crew's pretending that these talks where Trump has so graciously let Kim Jong-Un voice his concerns are making all this progress, but the truth of the matter is: 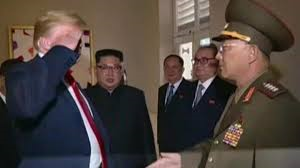 Trump is getting owned. Let's face it, he's not getting anything more from the little pie-faced dictator that he would have if he just ignored him. The nuclear talks are stalled, it is revealed that the one diplomatic supposedly good thing, getting back the ravaged body of Otto Warmbier, came with a price, and the best line his spokespeople can come up with regarding it is that he never intended to pay? As if saying the word of the US government is good for this: we could pay for hostages, but also our word might be good for nothing.

Genius. Just genius. And when North Korea in a fit of not being talked about for a minute decides to launch projectiles--Trump will say he is with Kim Jong-Un. I'm sure South Korea and Japan are so glad to hear this.

And like I've been saying, Iran's government is appalling, totally, but Trump gives them the opportunity to look like they have the high road. And all the while, Trump's government is still okay with what happened to Jamal Khashoggi. And he vetoed the decision to end our support of KSA's genocide of Yemen, which, because the GOP is also full of groveling shits, the veto was not overcome.

Trump and the fetid, feckless, useless people who surround him are fucking up foreign policy so much. Bolton and Pompeo are worthless. If I could wish these ass-first sniveling hot messes into a cornfield to never deal with our reputation abroad ever again, you know I would.

Posted by Vixen Strangely at 12:01 AM