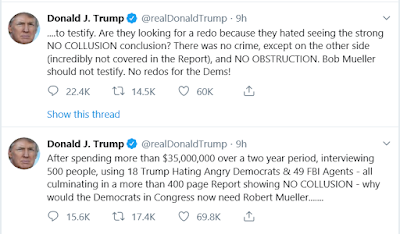 So, I ask you--is "Bob Mueller should not testify" what a very legal, very cool, totally exonerated stable genius has to tell the world, or is that actually rather suspect? Because to me, it sort of sounds like a person who really doesn't think he is exonerated because he wasn't, and knows very well that there was obstruction because he's still super into it.

Trump's 13, 17, 18, etc. Angry Democrats line is starting to get pretty old with me.  I just wonder why more Republicans aren't really angry, too. I feel like AG Bill Barr isn't the only person who didn't read the damn report.

Take Senator John Kennedy--he literally brings up as a hypothetical a thing that really did happen:


Sen. John Kennedy, R-LA, on Russians offering campaign help: "They're not going not walk in and say, 'Hi, I'm from Russia. I've got some information for you.'"

That's almost literally what the email setting up the Trump Tower meeting said. Don Jr, Kushner and Manafort bit on it. pic.twitter.com/z9llDwzLQr

The email Don Jr. (the one dubbed "too stupid to realize he was colluding") really actually even Tweeted out said "Here's someone from the Russian government and they are here to help you." But as early as March 2016, George Papadopoulos was making Russian contacts. The Trump folks never seem to have questioned whether reaching out to or being reached out to by Russia was a good thing. They never contacted the FBI. Even when the defensive briefing with Trump took place in summer of 2016, it didn't seem to occur to Trump that the prior contacts were suspicious and potentially damaging, first of all, because of what information Russia got about his campaign, and whether that left him a little compromised, and second, because he apparently didn't think he could either cough up those details and stop playing the Wikileaks game and uh, not lose.

He knew he wasn't winning without that edge. His bullshit need to cheat is why this investigation is slung around his neck like a millstone--his lack of basic ethics brought this on himself. Instead of gassing on about some 400 pound dude who could have hacked the DNC, he could have listened and understood what the US intelligence community was trying to tell him, as a warning--he didn't do that. He didn't do what a responsible person who cares about this country and understands the consequences of failing to do the right thing, would do. Instead he started on in claiming the election process was rigged and slamming the FBI.

But even the claims now that the FBI was trying to investigate potential Russian infiltration of his campaign has to be understood in context: this political naïf, with a campaign staffed with a collection of other third-raters and first-class rodent molesters, was having potential foreign agents fuxxoring around his campaign, and everybody was either too damn dumb or too damn corrupt to give a good damn about it. The so-called "spies" were counter-intelligence just trying to know what Russia was doing (because ideally, they should not have been doing anything!). The only way to be properly offended by their existence was if you actually were stupid enough to be colluding!

This is another reason why I am furious at the Trump claim that somehow, the Obama Administration should have been responsible for the Trump campaign team's dumb derelict asses beyond giving them a heads-up. They were not. If Trump was trying to make the claim that he was big league enough to occupy the White House, and had been claiming Obama was illegitimate and not that smart and all that for years, who the hell is Trump or any of them to say that big smart informed Obama was supposed to rescue idiot Trump's ass?

And by the way--everyone around Trump is still too damn dumb and too damn corrupt to understand why 2020 needs to be protected from interference, and why above all else, instead of Trump being personally offended that he might be considered illegitimate, he needs to recognize that it's Russia that made a right bastard of him, and he wasn't fitted up by the Deep State, he picked his own stupid path. And yep--he's been fighting it, with obstruction, all the way.

Maybe he's blind to his own fuck ups, but that doesn't mean any of us have to be.