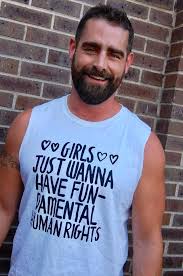 I've seen the video of PA State Rep. Brian Sims confronting anti-abortion protesters outside of a Philadelphia Planned Parenthood, and I am honestly a little conflicted. I'm extremely on his side regarding the good work that PP does for community health, especially for reproductive health, that sometimes social shibboleth. I also view anti-abortion protesters as basically busybodies who want to tell other people what they can do with themselves, without ever having to weigh and consider the life stories of the people who have bodies with histories, with health issues, with any human, entirely personal matter that is not up for some curbside "counseling".

I get it. What they do is intrusive and constitutes personal harassment of people living their own lives according to their constitutional rights.  If they gave such a shit, camp out at a legislative office or work harder on educating people about not getting pregnant in the first place if you want to stop abortion, but getting in the face of regular folks with their own problems has always been bullying (and sometimes the harassment of clinic personnel goes even further--so there's definitely that). Sims, a lawyer and LGBT rights activist who has also worked as a PP escort, has all the experience he needs of these judgmental, "doing more harm than good" people, praying at (not for, oh, make no mistake) patients as if to try to shame them out of claiming their bodies' needs.

I think of this really excellent video of a man who was being curb-shamed by these so-called "counselor" activists, when it was not at all the right time for them to insert themselves (and yes, I know it never really is).  They didn't understand the trauma a young family that wanted children could be going through, and were callous and defensive. These protestors are full of self-importance and relative ignorance about why people are even visiting a clinic, and I don't disagree with the idea that they are the ones who should find something better to do. Adopt a kid, if you think unwanted babies need love. Fund people with at-risk pregnancies and support universal health care. Support well-family programs for nutrition and day-care. But just don't holler in people's faces.

But I also feel like there's a rule about what public servants should be doing vs civilians. Is a persona with a public platform as an elected official in the right place using his social media to shame a protester? Or to use that platform to crowd source doxing? I'm not as cool with that, and not just because it gives license to right-wing pols to dox leftist protesters. It's just, you have access to better tools--use those! Bring that energy--without personally getting up in the activists' spaces because that deal is unequal.

I also think he got unnecessarily personal in addressing the old white lady as an old white lady. I know, I'm starting to radiate some serious "Talk to your manager" energy myself, but while I don't see "white" as a slur, please don't get all up in someone's case about whether they are old. Yes, some of the protesters are post-menopausal and don't need to consider their own likelihood of coming down with a case of baby on board. But also, some people just have old faces and can get caught out in their fifties.


(And being of the age where we'd call a pregnancy "geriatric"--I really fume at these heartbeat laws that keep cropping up. which can outlaw any abortion wherever a heartbeat can be detected, which could be as early as five week in. A woman in her late forties can have a late period, missed period, or whatever, and have no especial reason to assume we are pregnant--and of course, I recommend birth control, darlings! But still and all, we just are not going to have monthly pregnancy tests and we are going to have sex, and yes, at 46, 7, etc. you probably have a great idea why you don't want and shouldn't have a kid.  Seeking health care should not be a criminal offense. )

Back to Sims. I rankle a little less at his calling out ladies for being judgmental in their whiteness, because he and me are white as can be, and yes, there is a really profound bigotry in how white anti-abortion people portray the higher percentage of abortion regarding POC, but do not do a damn thing to alleviate any of the causes. Judging POC is an entire other level of jumped-up and foolish.

Was Sims right? On the merits, not on the execution, but in good part, because he has some access to demonstrate in a better way (and should have kept ID politics out of it). Is doxing ever okay? Here's the thing, Antifa doxxes white supremacists and this is a thing conservatives could get riled up about. But it is way easier to get pissed that someone is outing Mrs. Anderson who used to babysit you and taught Sunday school than @Menegeleluvr1488!! who used a baseball bat on someone in a phone video shared on Twitter.

Also in another sense, it's way worse, socially, to be some dumbass white supremacist who went and called himself @Menegeleluvr1488!! and still likes gainful employment (but bad luck, mate!),  vs being some mostly peaceful busybody who just likes to tell scared 15 year olds they are whores for aborting their obviously statutory rape pregnancies.

He's not right in how he went about it, even if I totally understand. And maybe this kind of direct confrontation might have a use--from other "civilians"/people who are not state reps. But now the RW messaging machine very well has it in for Sims, I fear--but you know what? I am for support, not abort with this politician. There's more right about Sims as a legislator than is wrong. He cares about his people. He should apologize to the folks who were very personally addressed in his videos.
I would rather challenge his detractors on why street harassment of medical patients is even supposed to be okay.
Posted by Vixen Strangely at 11:58 PM