From "Fire and Fury" to "Sound and Fury" 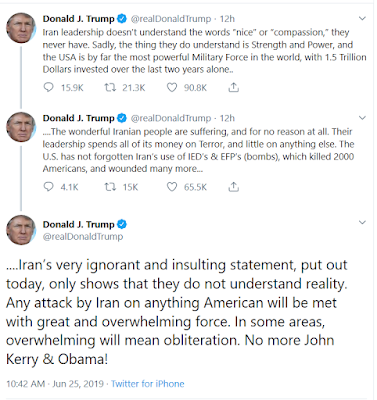 I haven't been blogging about Trump and Iran because the whole situation is basically incoherent to me. Last week's near-strike (which Trump says wasn't called BACK, no, no, he just didn't let it proceed after someone told him people could get killed) on Iran was awkward and whether the US drone shot down by Iran was in international airspace and not Iranian airspace is debatable. Pompeo and Bolton have been anti-Iran hawks since forever, and I think it would be dumb as hell to go to war with Iran, myself, whether over an honest mistake or a not very honest one.

Trump has a dilemma--he doesn't want to get boxed into a military conflict and he doesn't want to get boxed out of making a deal. The problem, though, is entirely one of his own making: there was a deal, the JCPOA, and he withdrew from it. He did do in a belligerent way, and hasn't exactly won back Iran's trust. Now he's putting sanctions on Iran to get them back to the table.

Yeah, that's not going to work. And then there is the Tweet-thread above, made after Trump was informed that Iranian President Rouhani called the White House's actions "mentally retarded". It's hard to say that going from sanctioning "Ayatollah Khomeini" to threatening obliteration rendered anything Trump is doing more coherent.

Trump has boxed himself out of negotiations thus far, and while he admits some of his advisers are hawks who prefer a military "solution"--Trump picked these guys! They are his advisers! So--?

It's his problem, but if he's successfully steered into war, there are plenty of folks on the GOP side who won't mind using the 2001 AUMF as justification to go for it (even if the House has another idea about it). It would be a dumb war, a repeat of the Iraq mistake, not as farce, but as greater tragedy, starting with tales told by an idiot.

What else is there to say?


Reporter: "Do you have an exit strategy for Iran if war does break out?"

President Trump: "You are not going to need an exit strategy. I don't need exit strategies" https://t.co/HB3tptBtmF pic.twitter.com/FDlSWjSxdJ

Posted by Vixen Strangely at 1:03 AM