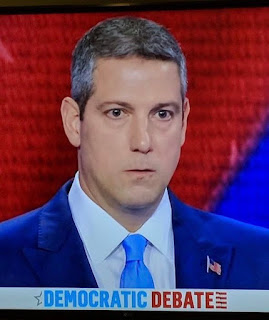 There were too many people on the stage, and I find I'm really easily distracted by that, so the debate was on my tv, I followed the closed captions and what people were saying on Twitter on my laptop, and watched a Mission Impossible movie on my husband's computer. I have a few takeaways based on this very informal perspective:

Speaking Spanish during this debate is kind of like doing magic tricks at a party when no one hired you for that. "No one needs to see you levitate a quarter, Bob."

Tim Ryan had an expression like he sort of realized he did not know why he was there but he was going to stay until the debate was over because it would be rude to just leave.

I don't know if two hours of this many people changed anyone's minds about who they wanted to see more of.

It's both too early to get really hung up about polling, but the people polling at the bottom really should go.

I might do a better job following the next debate but I can't swear to it.

Posted by Vixen Strangely at 11:37 PM