I Followed This Debate a Little Better 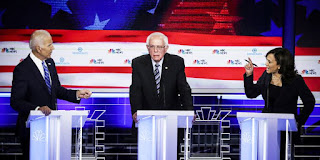 I won't say that I actually watched every minute of the debate, because it's still a lot of people and debates don't really do a lot for me, okay? But I would say this one was a more interesting mix of people, and while I thought I might see a Biden/Sanders clash as the two front-runners, seeing Kamala Harris address Biden's record on race regarding his comments on segregation was what the young folks call a big mood.

Harris has considerable skills in debate and control of what she's setting out to do. She made her point clear--she wasn't calling him out as a racist, but asking him to understand why what might've worked politically in the 1970's was painful to discuss that way in the context of 2019. His response was defensive and that was problematic. Eric Swalwell had come for Biden a bit more directly, saying "Pass the torch." Harris actually put in the work to define Biden in light of the past and show herself as part of the forward momentum of the party. It was a breakout moment, no question.

Buttigieg and Gillibrand were okay. Marianne Williamson is really...different, though, isn't she? I definitely didn't have starting beef with the prime minister of New Zealand on the bingo card.

And pretty much my point from last night, it's both too early to get really hung up about polling and the people polling at the bottom really should go.

Posted by Vixen Strangely at 12:35 AM