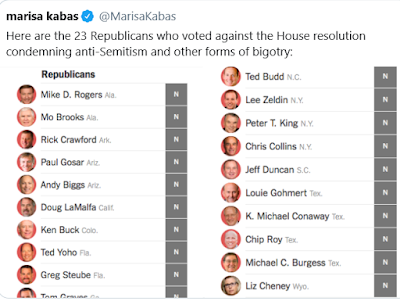 There was some reason to consider the Anti-Hate bill as somewhat reactionary--as in, it was a reaction to D.-MN Rep. Ilhan Omar once again running a bit afoul of what is considered correct language with respects to use of anti-Semitic tropes, but it was written not with this Representative only in mind, or with anti-Semitism only in mind, but as a general resolution broadly condemning hate, which seemed quite appropriate:

How does a deliberative body serve the needs and interests of a diverse nation, where hate language proliferates even amongst them?

It was overwhelmingly passed, with all Democrats voting in the affirmative, with 23 Republicans voting "nay" and Rep. Steve King only voting "present". It did not single out Rep. Omar, nor did it single out anti-Semitism only. But the voting found 23 Republicans who were not interested in supporting this anti-hate bill.

Now, I have tried to hold Rep. Omar's history in perspective, in that I don't want to unfairly judge what she has said and I do recognize her perspective is different. And if a white gentile woman's advice means anything, I could counsel that she refrain from comment regarding Israel right now and listen to how others speak about it for the time being, and especially what Jewish people have to say, because allyship begins with not always leading with one's own views--but I'm sure she is getting all kinds of advice, counsel, warning, and sadly, outright threats. I'm also not interested in the tears of my fellow white privileged gentile lady, Meghan McCain. Rep. Omar is not advancing the George Soros slur that influenced the vicious bigot that killed 11 people in Squirrel Hill or endangering the nation of Israel by her words.  She is talking about lobbying on behalf of an actual country called Israel that has interests apart from US interests which need not get an immediate sign-off from US representatives when we also have stakes to consider. That is not dangerous--it's just pragmatic.

Maybe, just maybe, someone working for the Federalist appeared on a Tucker Carlson show where it was alleged that George Soros was funding caravans, is that a sign that the right has a problem? If the name of the person bringing up Soros' name was Horowitz, would that make a difference? If it was Omar, would it mean something different? Maybe the RW in the US also has a little problem, and we all have a big one--how to not use identity issues as a wedge, but always respect that all people simply have identities.

This consideration shows up in the vote totals regarding this resolution with the 23 GOP people who decided to be very circumspect about the kind of hate they intended to oppose. Maybe Louie Gohmert hates anti-Semitism, but still needs other people to hate. Mo Brooks, Lee Zeldin, Paul Gosar--there aren't a lot of surprises in this list. Liz Cheney comes close to being a surprise, but she's an Islamophobe who is pro-torture and tried to throw her sister's marriage under the bus for an election, so, well, so, so typical.

Every Democrat was willing to commit to the idea that hate was bad. 23 Republicans explicitly did not, but needed clarifications and conditions about the hate they might still have some use for.

And in the interim--let's recognize that not being hateful does not mean we can't look at the US/Israel connection critically. Should individuals and businesses be abridged from boycotting the goods and services of a country if they don't agree with the country's policies?  Middle East issues and especially those of Israel and Palestine are deeply complex.  This requires dialogue--where we recognize subtleties of local perspective and stakeholding, for example. We can rise above hate--but not while staying partisans who need to spit a little hate on everything.
Posted by Vixen Strangely at 1:45 AM

You know, I don't think most people have understood that Omar, AOC, and the rest may simply be part of the new zeitgeist. Many Democrats have rejected what Omar has had to say about Jews. She has also criticized Barack Obama, she has condemned Nancy Pelosi as being just another old, white woman, and I gather that Omar and her colleagues regard Pelosi and Hillary as a couple of irrelevant centrists.

Cory Booker wants to put your husband out of a job: Disallowing the eating of meat and getting rid of cows will shrink the need for meat cutters.

Warren wants to give reparations to American Indians. I'm part Cherokee, so I'll be happy to let them take money from you to send over to me so that I can be compensated for the scourge of my ancestors.

One of the guys who started Greenpeace has called out AOC and explained that her policies would be responsible for the deaths of millions of people, and the forests would be eliminated by people cutting wood for heat. It's going to be tough on you east coast dwellers to get through winters without heating oil.

The thing most of these people don't understand is that out in the middle of the country we have normal people. They need stability, the ability to plan, not to be jerked around by mindless, thoughtless policies.

Throughout the country there are normal Republicans and Democrats who are in agreement about goals but have differences in opinion about the means. (A desire for some social initiative is not really different than a desire to have a new Cadillac. The question is how one can safely and sanely go about trying to achieve goals. And a white woman has as much validity in respect to goals as anyone else.)

I hope you're doing well, and I hope your husband continues to have a rich and prosperous career.

There's a lot here to unpack, but it's your baggage, not mine. Telling me, a liberal, what other liberals think has the problem where you actually don't know what you're talking about. Saying stuff like "Many Democrats reject" means nothing--what is a "many"? What do those "many" think she said? There was a kerfuffle regarding House leadership over the question of whether new blood was needed--but the people involved weren't even necessarily the most liberal, and AOC, for example, likes Pelosi's leadership fine--we're a big tent.

Reducing meat eating in general and changing the ways meat is farmed and processed will help the environment--and my spouse has long been concerned about the issue of how meat is sourced and fed, himself. Cory Booker has expressed his veganism as being about his own views about animal cruelty and the environment, but none of that has been concretized to food policies that ban meat, any more than the Green New Deal bans cows over bovine flatulence. This notion of Greenies as wicked "Hamburglers" is a silly CPAC fantasy.

There's a family story I have that I might be at least 1/128 some part Native, but if your family bullshit is better than mine, I'd be happy to flip a buffalo nickel your way. I guess the actual metric used by policy would be acknowledgement by the sovereign tribes. Maybe you are in, maybe you are out. I'm happy to subsidize the success of marginalized people which is why I sometimes respond to your comments.


Normal is a statistic, people are real. All policies are an expression of desired outcomes, and might be a little bit of an imposition--how much should be the debate, not whether we need regulations at all. Laws should be equitable to the rights of people, but can not be to professions because all are different, and so it can happen that whole trades might, by law, be cut off if materially harmful, like heroin dealing outside of prescribed medical uses for opium derivatives, or, if we had to--any coal burning plant for general electric grid service. This can certainly mean people stop being employed at a particular job--but people are laid off from factories for random economic reasons all the time--how is this different? That is also a response to a kind of market force. The policy goal, though, is to provide a safe landing for people economically unmoored from their traditional employment. UBI, one of the policies of Andrew Yang (sort of a boutique Democratic 2020 presidential candidate) has this as part of his platform. It stands for "Universal Basic Income". In other words, the government provides cash money for people to just live on, while they figure out what to do with themselves. Because, as the poet Eminem reminds us, food stamps don't buy diapers.


And you know what? If that means people aren't living on the street and sleeping in their shoes? I can be entirely down with that.