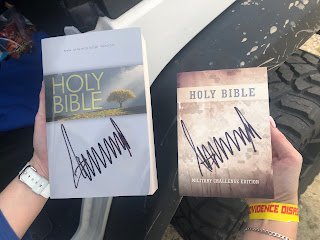 It makes sense to me to open this post with Donald Trump signing the front of Bibles for Alabamians who have survived the extraordinarily severe tornado outbreak that killed 23 people. He would surely sign the cover, as it is the only part I really think he ever looked at. But that isn't weird. A Bible is a keepsake book, a thing you won't throw away. And the signature of a President, no matter which one, is a kind of historical record. Many Christians have keepsake Bibles where there is a place to recognize family histories like births and deaths. It's a part of our family lore and hand-me-down heritage to gift a Bible to a newlywed couple to remind them to raise their family in the faith. My parents received such keepsake Bibles that I ferreted out as a unchurched child among our various basement treasures--put-away unfashionable clothes and holiday decorations and military mementos and other random things people in their thirties have that their kids might find.

I found the religion I didn't have--and because I was a reader, read. But there was nothing in those keepsake gifted Bibles that made me feel anything different about us--other than that my immediate family never indoctrinated me into this thing of religion that their families obviously had, that we never practiced. I used the unused pages to try and fill in the family history bits that had been left not filled in, but didn't even know what apparently, family Bibles should have recorded.

What I did know, though, was better than religion--I had safety. My parents taught me to be capable. I wasn't brave, but I could fake it. I wasn't strong, but I could find strength. I was not fast, but I could be ready. I was smart, but they taught me when to not be too clever. I don't know what Donald Trump was taught when he was a wee'un, but I don't think it is too much removed from his grandfather who started hotels that might have offered more than the usual accommodations. He was taught to monetize, to capitalize.  And this is what he does. He moved from residential real estate to casinos because here is more money there. And then branched out to other ventures like a modeling agency, that wasn't too far removed from human trafficking.

Things being sex-trafficking adjacent though, are necessarily bad, and it looks like Trump and the GOP are pretty well sex-trafficking adjacent. (More so than usual.) A recent bust of a spa chain that deals in massages and more which was goddamn close to Mar-A-Lago brought in NFL Patriots owner Robert Kraft, but the founder of this little old business selfied with so many prominent GOP figures, but most notably Trump at the Super Bowl. Well, I guess for a person with a dodgy business, friend in high places could come in handy. She also took pics with Jesse Watters and Judge Pirro and all the Trump kids and so on.

But is there more to the story? Is the madam trafficker also selling access to a certain person inclined to be accessible at one of his business addresses?  Yes? He is often there and is apparently susceptible to people who want to drop him a note that says anything like "Dear king".

Now, my friends, you know in this country there shouldn't be any kings but Jesus and Elvis, and Elvis has left the building. Trump is no "King Cyrus" either. Trump being called "King" is weird, but his accepting hints of policy from randos who frequent his business is also very weird.

I look at his trademarks, and have to wonder what this is all about. Is he eventually setting up actual escort services and what could generously be called spas along the lines of Mme. Yang at any of his properties abroad as a kind of full-service agreement? After all, this is the guy who is not at all circumspect with his own sexual continence. But I also wonder--what about the blackmail potential? Trump has used surveillance on people at his properties. To what end, though?

Posted by Vixen Strangely at 12:59 AM