What The Hell are You Doing? 3: CoNsErvAtIsM Edition

Reporter: Has the President ever denounced Steve King?

Sanders: He denounced him to me privately. pic.twitter.com/B5gq1bmX2q
— Josh Marshall (@joshtpm) March 11, 2019


I know Sarah Huckabee Sanders hates her job the way I hate touching the little wet bits of plate scrapings that end up stuck in the sink strainer when I do dishes. She doesn't address the press very much, and when she does, it seems a little hostile and she's pretty quick to say a lie. The above exchange isn't exactly a lie, though--it's just a deflection. But whew! Denouncing someone privately to a person whose job is to relay your message (and maybe try and make you look not-terrible) is not actually a "denunciation". An actual denunciation would be saying Steve King is a racist and what he says is not acceptable, right out loud where the people can hear. What Trump would have done if he privately let on to his press secretary that he would just rather Steve King not be so icky and embarrassing and whatnot, is a complaint. It's a wholly different, and in this case, less honorable tactic called "having it both ways". Trump would like to keep his racist cake and eat it, too.

The dishonesty of this barely touches the "infanticide" claim, though--which was made by several Republicans at CPAC and has now been repeated more than once by Sanders. (She also played about with the idea that Democrats hate Jews, which is also inflammatory and astounding.)

I do not know if the lies are the part of the job she hates, or if facing the press is the part of the job she hates, but I genuinely believe she could, if she cared to tell the truth, just do so and be fired, or fucking quit and see if someone else will let her lie to people who might not ask her annoying questions, as actual journalists do. Maybe she could teach a course in doublespeak at Liberty University or something. She just seems so unhappy, and I'm close to thinking she really damn well ought to be.

Speaking of the infanticide lie, recently agitated gentile faildaughter,  Meghan McCain has penned or at least signed her name to a thing with Ben Sasse about how Democrats want to throttle newborns. Except, this isn't even a thing.  People do not carry out pregnancies to term to willfully decide at the last moment to snuff their neonate. These late term situations are tragic situations where the pregnancy may be terminated at a stage where a healthier fetus could be conceivably viable outside the womb, or where a delivery results in a child who will not survive long regardless of what interventions are available--but these situations are not infanticide. Abortion is abortion. There is no surviving neonate. A delivery where the fetus is born alive and no medical interventions take place is palliative care--because those interventions are unnecessarily prolonging the process of dying that this small body is regardless going to do. This is the decision not of a murderer--but a parent and a doctor trying to do a humane thing. Calling it otherwise is bloody-minded.

McCain and Sasse have both built up a possibly undeserved goodwill with liberals by seeming to be the kind of conservatives with which it might be believed we could speak. They aren't vicious bigots in speech or manner. But they ignore all the shittiness of the general state of conservative speech around them, and this is the kind of signifying cack-witted pious bullshit they cough up just when Trump highlights all the ways corruption and hypocrisy run rampant on the GOP side?

Fuck them both--I can ask what the hell they are doing, but I know, and they do too.

Jeanine Pirro did a racism that was kind of amazing--she addressed Rep. Omar's "kind of" dual loyalty claim about whether one can serve US interests and Israeli interests, by actually stating that Rep. Omar's hijab meant that she did not serve the US Constitution. Fox News rightly did condemn this, although Pirro is not yet quite onboard with the idea that practicing Muslims can be solid Americans. Sheesh, Judge Jeanine, do you even know how Islamophobic you have to be for your organization to even notice? (My guess is no, and her org barely called her out for it before.)

But let's talk about Tucker Carlson, because you know I would--what the hell is he even doing at anytime, anywhere?  Well, some white nationalism paired with misogyny and a dash of homophobia,to tell the truth. I feel like we all should have known that for more than a minute. But no, honestly, he is very much these things and I actually am not really serious if I try to ask WTH is he even doing, because it's obvious. The man doesn't need money, and spreading hate fulfills him.

Anyhow, CoNsErvAtIsM seems to have an honesty issue, a signifying issue, and a being shitty to lots of actual living humans issue. I could try to take these assertion of theirs as serious, but they are trash humanity. Hating on human families who have failing pregnancies or at-risk births to make a bogus point against a political opponent, or slagging people of minority religions, or shitting on people of various ethnicities--is just gross. What is wrong with conservatives?

Speaking of serious, have you seen this fail, h/t Tengrain? 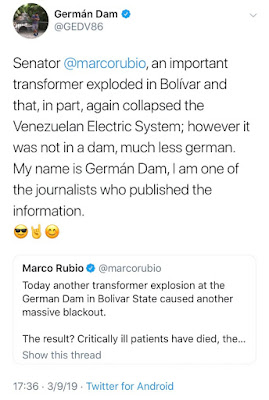 Lil Marco wanted to sound pretty serious about the Venezuela threat, but I guess that's a verdammt fail. Or so I would say if I gave a German Damn. But you know, and I know, he's mentioning Venezuela because we could do a war there. And that is very serious business. And Marco Rubio wants to sound serious. I think we can see WTH he's doing--even if he doesn't know WTH he's reading or retweeting.

Posted by Vixen Strangely at 1:00 AM

I'd bet at this point in time she could make a ton of money telling the truth!

To be sure--I think once the NDA's on White House personnel are invalidated, a lot of former staffers are going to have very interesting books on the market.